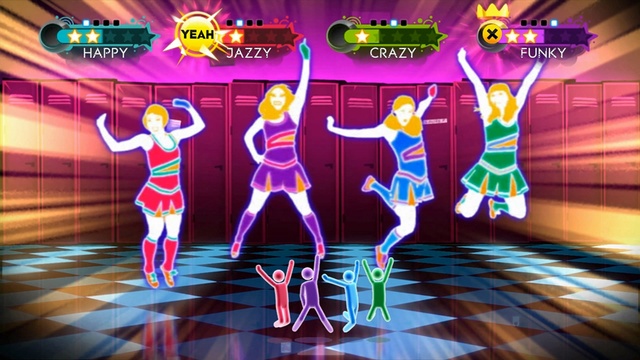 Letting go of your inhibitions can often be difficult - just ask a sober person at a karaoke bar - but doing so is a requisite for getting the most out of Just Dance 3.

Its hilarious and often downright insane routines have you doing the jive bunny, playing air guitar, and jumping around like a complete loon to an eclectic selection of songs that are guaranteed to get you dancing.

Though Just Dance 3 still lacks a career mode or even a set of simple unlockables, there's plenty of fun to be had performing the visually striking and silly routines with a group of friends. It isn't the game to go for if you're after a technically challenging dancing experience, but if it's a silly, energetic, and accessible dancing game you're after, it's unmatched.

The Just Dance series has never been difficult to pick up and play: you pick a song to dance to, hold the Wii Remote in your right hand, and mimic the actions of a virtual dancer onscreen. You're awarded points based on your movements, which are tracked by the Wii Remote, with each being scored as bad, OK, good, or perfect. No matter how many points you rack up, though, it's impossible to fail out of a song.

While this makes the game much more accessible for casual players, it removes much of the challenge, which makes playing on your own a dull experience for all but the most dedicated dance fiends.

Get three of your friends together, though, and you'll have a lot more fun. Any song can be played with up to four players, and there are specific songs that have been designed with more dancers in mind. These include a bouncy duet to Girls Aloud's "Jump" and a rock-and-roll duet to Queen's "Crazy Little Thing Called Love." It's the four-player dances that are the most fun, though, with choreography that's clearly designed to cause as much embarrassment for the participants as possible. Highlights include the Power Rangers-inspired "Spectronizer," complete with multiple superhero poses, and Kiss' "I Was Made for Loving You," which features a full four-piece air band and the most unexpected dancing twist in the game.

Aside from the standard Dance mode, there are different playlists to play through, coming under the banner of Sweat mode. You can jump straight into a playlist, or take part in a seven-day challenge, which does a great job of keeping track of your dancing and how many calories you're burning over the course of the week.

Playing with friends is key to getting the most out of the game's routines, and when you do so, it's hilarious. Each routine has been expertly choreographed, not to be technically impressive, but to be as much fun as possible. Even the most cynical of players should give Just Dance 3 a try - you might come away a little embarrassed, maybe even a little sweaty, but you'll have a huge smile afterward.

"Just Dance 3" is available now for Xbox 360, Wii and PlayStation 3. It is rated E for Everyone by the ESRB.

For more on this game, go to GameSpot