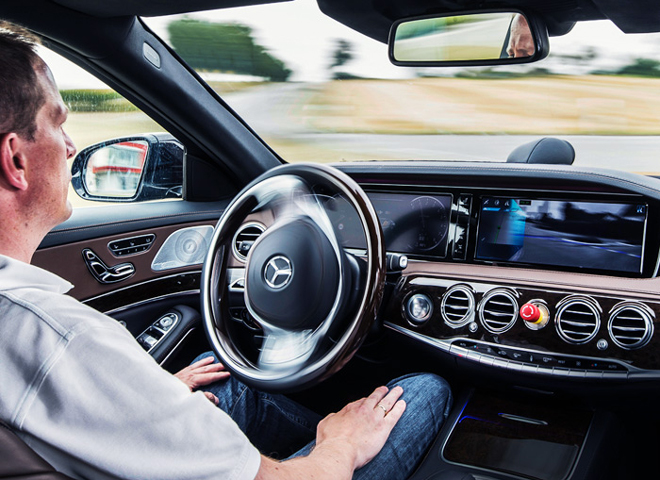 Coming soon: Cars that don't need YOU to drive them (though you're welcome to come along for the ride). Barry Petersen has been checking them out:

When the car of the future comes along, you can bet this will be one of the favorite options: A valet park feature that allows the car to drive itself through a lot . . . find a space . . . and park -- and comes back when summoned.

Shopping at the mall will never be the same.

"It will come when the autonomous car is ready to go on the road," said Carla Bailo, senior vice president of research and development for Nissan America.

"But I don’t want to wait for that," Petersen said.

"I’m quite fond of that feature myself," Bailo laughed. "This is the era that we are headed into. It's completely revolutionary. It is going to change the way we manufacture and develop vehicles, no doubt."

This past week Nissan's autonomous car was on display at the Detroit Auto Show. But virtually every automaker is chasing the idea of a self-driving car.

Mercedes is testing one on the streets of Germany. This year, Volvo will have its self-drive car on Swedish roads. Google is among companies with one in the U.S.

They're all racing to have a fully-autonomous car for sale by the end of the decade . . . an automobile revolution with one overriding goal: safety.

"If your ultimate goal is zero fatalities, you have to have the cars being able to manage themselves," said Bailo. "The final role of autonomous should be zero fatalities."

That requires sensors on the car: stereo cameras that look forward and behind; radar and sonar and infrared to sense objects all around; and the software to react.

Nissan even studied fish, said Bailo: "Primarily with their movements, and the way they are able to get huge amounts or huge quantities through small areas, and again with their sensory perception to go the right way and not hit one another. We needed to duplicate those same kind of systems which is what our lasers and radar are doing for us."

Like, gauging movements of other cars when merging into traffic, or spotting an absent-minded pedestrian at a crosswalk.

In fact, the revolution is already an evolution, with some self-drive technology now in use, like the car that parallel-parks itself, or sees a child behind the car and hits the brakes faster than a human may react.

Charles Kawashima, a senior engineer with Mercedes Benz, took Petersen for a spin in the new S-Class Mercedes with technology now available in 2014 models. Once on the highway, Kawashima activated the Distronic Plus steering assist.

It was Mercedes that first popularized technology now standard in cars, like air bags and anti-lock brakes.

When this car's sensors identify a drift across a lane, the steering wheel warns the driver with a slight tug back to the center.

And the car can spot trouble well before a distracted driver. Say goodbye to rear-end collisions.

When the car slowed down, Kawashima said, "The car's doing that.  I didn't touch the brake pedals at all."

The reality is this car is helping the driver, because the driver is probably least efficient and slowest to react.  And, Kawashima said, the car could react a lot faster than a person would in an emergency.  "In certain situations, scanning the distance between the vehicle in front of me, and my own vehicle, the vehicle does that very efficiently," he said.

It's been a long time coming. A General Motors display at the 1939 World's Fair drew lines two miles long to see self-driving cars. By 1956, the dream was updated, in a promotional film produced by GM. It foresaw hands-off steering in cars under automatic control by 1976. [Click on the video player at left to watch this wonderful short film - and it's a musical!]

"The car has a camera that is looking at the lane markers, and sees that there's a solid lane marker on the left, dashed lane markers on the right," said Salinger. "It knows that it’s supposed to stay in this lane, so it's going to follow those."

But it isn;t fool-proof.  The high-tech system, just like a driver, can be blinded by something as common as the sun reflecting off a rain-slick highway, obscuring the lane markers. When that happens, the seat vibrates, warning the driver to take back control.

And let's put Salinger in the skeptic's column. There's a lot more technology needed and years of testing before a self-driving car hits a showroom floor near you.

"A car that can just operate on the freeway in reasonable weather when [the road's] not covered with snow is one that can be done by 2020," said Salinger, "It's not fully autonomous because it will still need the driver to pay attention and intervene in some situations."

Jim Hall, once an independent auto consultant who recently went to work for GM, says no matter how long it takes, the self-driving car IS coming.

"The word drive is a word without a future," he said. "This is as much a change to transportation as the original automobile was when we had horses.

"It's an inevitable thing because a self-driving car is a cultural imperative. With urbanization the way it's happening, and super-urbanization that you're getting in Asia, when that happens, there come a point when you can't make the existing system work efficiently."

Hall sees a brave new driverless world. He says he would not be surprised if the day came when people would not be allowed to drive.

And other things may go away, like speeding tickets. When cars drive themselves, they will be programmed to obey laws humans may not.

Also on the endangered list: lawyers who make a living when cars crash, because self-drive cars won't.  It's a branch of law that Hall suggests, no lawyers will practice.

And while we’re rethinking driving, how about rethinking the car itself? When cars drive themselves, who needs a steering wheel? Or even a window to look at the road ahead?

"You could end up with autonomous cars that are radically different than what we could expect," said Hall. "They could be these spectacular sculptures on wheels that have no windows, but they’re beautiful forms."

That long-dreamed-of automobile future is finally just a few more miles down the road.