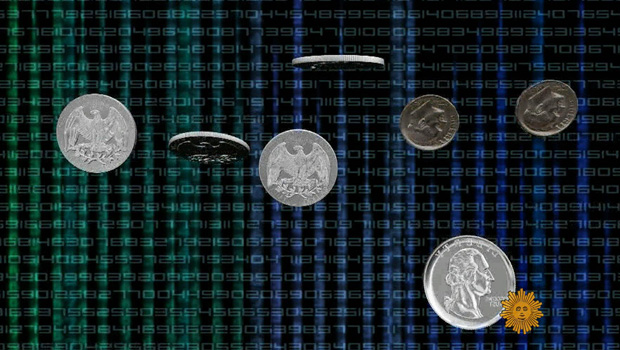 WHAT A COINCIDENCE! is what we might say when we run into an old friend we'd just been thinking of. So is it just a chance encounter . . . or is it evidence of something more? Our Cover Story is reported by Susan Spencer of "48 Hours":

"Too many coincidences for it to be random," Bill said.

Hillary Solomon says she doesn't think they would have married, or even met, were it not for coincidence.

Coincidence One: Bill's mother and Hillary's father were high school friends, who hadn't been in touch for 40 years, when they reconnected by chance.

"They realized that one had a son named Bill, and one had a daughter named Hillary," laughed Hillary Solomon. "The Clintons were in the White House at the time. So they thought, 'Oh my gosh. How funny. Where does Bill live?' 'Lives in New York.' 'So does my daughter, Hillary. We gotta fix 'em up.'"

Coincidence Two: In a city of more than seven million people, Bill and Hillary lived in the same neighborhood, on the same street, in the same building -- in fact, in the very same line of apartments.

There they were, just seven floors apart!

Bill's mother insisted he HAD to call Hillary. But he played it cool, until -- Coincidence Three -- he ran into a former coworker in his building.

"I said to her, 'What are you doing in my lobby?'" recalled Bill Solomon. "She said, 'Ah, I have a really good friend that lives in your building.' And I said, 'Who is that?' And she said, 'Hillary Kimmelman.' I said, 'Oh my God. I have her number in my pocket!'"

With that, Bill made the call . . . and the rest is history.

Professor Jay Koehler, at the Northwestern University School of Law in Chicago, is an expert on probability. He describes a coincidence as "a striking co-occurrence of events that appear to be meaningfully related but, in fact, are related only by chance.

"A classic example of coincidence would be, you get to thinking about somebody who you haven't thought about for years. And reach for the phone and -- you know where I'm going with this -- the phone rings, it's them!"

Coincidences seem to fascinate us all, especially when they involve unlikely characters, like Thomas Jefferson. When Jefferson and John Adams signed the Declaration of Independence, they had no idea that they would one day be linked by a very freaky coincidence.

The two men, who both became president, both died on the same day -- July 4th, on the 50th anniversary of the signing of the Declaration of Independence.

That, says writer SQuire Rushnell, (the author of "When God Winks"), was the very beginning of his questioning whether there was something more to coincidence than just coincidence.

For Rushnell, it was a sign: the onetime TV executive has started a successful cottage industry -- books, speeches -- all about coincidences, or as he calls them, "Godwinks."

"A Godwink is one of those little coincidences that makes you say two things: 'Wow, what are the odds of that?'; and 'I wonder, is that coincidence evidence of divine origin?'"

"I believe that everybody has Godwinks," he said. "They are like gifts left on the doorstep. And my job is to get you to open the door and open your gift."

Inside that Godwink gift box, Rushnell says, you might find the right relationship -- like Bill and Hillary Solomon did -- or even the right career.

Rushnell said to Spencer, "Now there was something that caused you to be at CBS -- maybe it was a call out of the blue, maybe it was somebody you bumped into. But maybe it wasn't by chance at all. Maybe it was by Godwink."

"Maybe it was because I applied for a year?" laughed Spencer.

Science writer Matt Hutson said, "There's some research to suggest that a feeling of destiny can be good for you mentally."

But even if it is reassuring, it's not reality; Hutson says that while coincidences are NOT destiny, they ARE destined to happen, thanks to something called the Law of Truly Large Numbers.

"It's a term that a couple of mathematicians came up with to describe this idea that, with a large enough sample of events, any outrageous thing is likely to happen," said Hutson.

Another way of thinking about it is: if you flip a coin long enough, eventually, you'll get ten heads in a row.

And the universe flips a lot of coins.

All those coin flips add up to a simple mathematical answer for even the weirdest coincidences. Like this one: On the first anniversary of the September 11th terror attacks, the New York State Lottery's winning numbers were 9-1-1.

"In a world where there are lots of people and lots of events happening to lots of people every day, you're going to come across a co-occurrence of events that seems to be extremely unlikely," said professor Koehler.

"You're taking all the fun out of it," laughed Spencer.

So when two former presidents died on the same day, it wasn't mystical, just mathematical. Though we tend to make these things mystical by ignoring annoying little details.

According to science writer Matt Hutson, it's as if human beings are hard-wired to be amazed by coincidences. "Exactly," he told Spencer. "That's the power of human irrationality."

But what about the power of "Godwinks"? Or the force of destiny?

"I can't rule it out, just as I can't rule out unicorns," Hutson said. "But there's no strong evidence for unicorns."

"Wow, you really are a killjoy, aren't you?" laughed Spencer.

SQuire Rushnell says, "Mathematicians will always have an answer for everything, because they have to. And I put more faith in a grand designer than I do in accidents happening numerically."

For Rushnell, the stories are evidence enough, like this one about actress Diane Lane, whose father drove a New York City taxi when she was a kid: "He would come and pick her up after school and she would stand on her tippy-toes looking for that one cab out of all those cabs." The medallion number: 6F99.

Shortly after her father died, Lane was in a car in Manhattan, thinking about her dad. "At that moment, her car pulled to the curb, she stepped out, and her heart leapt. Pulling in right in front was cab number 6F99. Now, what are the odds that that one cab -- her father's exact medallion -- would be at that exact spot, at that exact moment in time, to give her a message of hope and reassurance?"

It's all familiar territory to the Solomons, whose list of coincidences seems almost endless.

One thing believers and doubters agree on: You're more likely to find life's amazing coincidences if you're looking for them.

SQuire Rushnell told Spencer that she, too, will have one, but "only if you allow them."

Then, he added, "Once you see a Godwink, you see them all the time."