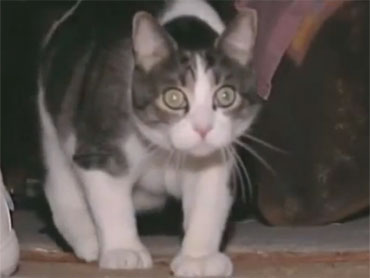 That's the catchy lede to a story that's popping up all over the web, being posted by local news outlets and big newspapers worldwide. The only problem is it's a year old.

Lives aren't going to be lost because a water-cooler animal story got recycled a year later by editors who simply wanted a piece of the pie as a (seemingly current) story started going viral on Facebook and elsewhere.

But the story of Sal the cat should serve as a reminder of how filled with misinformation our media echo chamber has become.

Sal's story was first posted by WHDH, an NBC affiliate in Boston, on Jan. 7, 2010. Sal's owners Guy and Anna Esposito had listed him on the "pets" section of a state census form. Some time later, Sal got a jury summons in the mail.

As WHDH reporter Janet Wu explained in the original newscast, Anna filed for Sal's disqualification of service. But since Sal isn't too old, ill, or a convicted felon, "She chose the most obvious reason - Sal can't speak English."

The jury commissioner was unmoved by the common jury duty dodge and denied the request. When the story aired, Anna had acquired a letter from Sal's vet stating that he's a cat, but, at least at the time, Sal was still under orders to appear in court March 23 - meaning March 23, 2010.

Flash forward 2011. On Jan. 13, the Huffington Post appears to be the first news source to publish a story about how "Boston resident Sal Esposito recently got called in for jury duty," complete with the details about the jury commissioner denying Sal's exemption and how he's still expected to show up March 23. Along with a few fringe news outlets, Canada's CBC also picks up on the story, reporting it as new.

Keep in mind that many of these stories link back to the original WHDH report, with the January, 2010 date there for all to see. But many of them also link to one another. On Tuesday, a Washington Post blog picks up on it, and cites the current Fox affiliate report from Boston. Meanwhile a Fox affiliate in Cleveland links back to the Daily News. NPR's "Morning Edition" also picked up the story Tuesday, without attribution.

Readers like these quirky stories - and so do I. But there's a sloppiness attendant the rush to roll them out. News organizations point to one another as the source and move on, often without asking important questions. There's a reason we call the transmission phenomenon "viral." Once the story is out there, it's hard to contain.

(In Sal's case, there's no reason to believe that the original story isn't genuine.)

Although "Sal-gate" is inconsequential, the same dynamic has played out in more serious contexts. Numerous outlets, citing one another, passed on an erroneous report that Rep. Gabrielle Giffords was killed Jan. 8. Giffords' own husband was led to believe that she was dead.

My organization is guilty of it, too. We do rewrites and we make mistakes. I noticed the Sal the cat date discrepancy as I was setting about cobbling together our own version of a quick rewrite.

But in chasing trends, it's easy to lose sight of our most important goal - developing and maintaining trust among our audiences. Cite-and-rewrite often delivers little of value to those audiences and reporting should remain the cornerstone of the daily avalanche of content we produce.