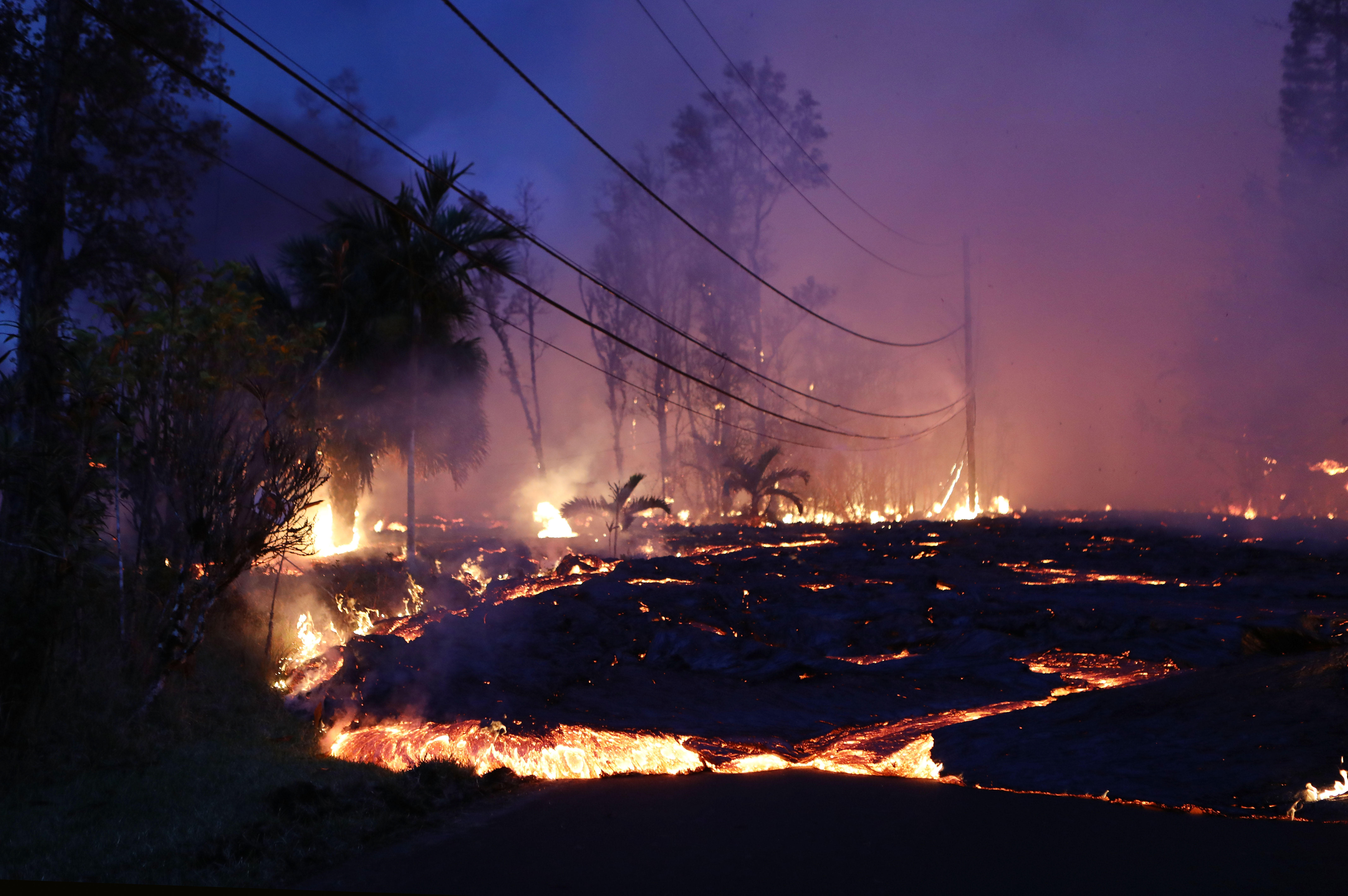 HONOLULU -- The lava pours from the ceilings. It explodes from the mountaintop. It creeps, then pours and roars down the mountainside as people frantically try to escape -- with dinosaurs chasing after them. It's the opening act of a major summer blockbuster, but the eruption part is reality for people who live under Hawaii's Kilauea and Guatemala's Fuego volcanoes.

The cast and crew of "Jurassic World: Fallen Kingdom" say it's unfortunate that their summer film revolves around a massively destructive erupting volcano. It's also -- obviously -- not their fault.

The film shot in Hawaii and the United Kingdom in 2017 premiered in Madrid in May, three weeks after Kilauea started sending lava into neighborhoods. It is set to be released June 22 in the United States.

The stars held a media day last week to promote the dinosaur sequel on Oahu, less than 200 miles from Hawaii's Big Island where lava flowing from Kilauea  has claimed as many as 700 homes, CBS Honolulu affiliate KGMB reported this week. In the community nearby, there is "a lot of desperation out there. A lot of tears. A lot of, 'What now?'" Big Island Mayor Harry Kim said Monday at a press conference.

In Guatemala, at least 110 people were killed when a volcano erupted June 3, sending waves of super-heated debris onto villages on its flanks.

The film's writer and producer, Colin Trevorrow, said the timing of the film's release was not something they could have planned for.

"Obviously not something that was anticipated in any way," Trevorrow said at Oahu's Kualoa Ranch, where some of the movie was filmed. "And if anything, I think it just is a reminder of the unrelenting power of planet earth and how just dwarfed we are by that."

Characters in the film go to a tropical island where their man-made dinosaurs face extinction from an erupting volcano.

Actress Bryce Dallas Howard, who plays Clare, the head of the park, in the previous film, now sets out to save the animals she once oversaw. Howard said she is uncertain how volcano-affected people might receive the fictional depiction of spewing molten rock that dominates the first part of the film.

"I really don't know," she said. "I mean, it's intense what's happening. And a natural disaster is one of those things that kind of, those moments I think bring everyone together because that's not a political act, you know, it's something where we are all vulnerable to the power of this planet."

Though the scenes of molten rock exploding from the volcano in the movie smack of Hollywood dramatization, Trevorrow said the "Jurassic" team worked diligently to create realistic imagery.

"We had volcanologists as consultants and we watched a lot of film and a lot of video of various kinds of volcanoes and how they erupted. And we made sure that we timed it out very carefully and presented it in a way that had clear visceral, visual imagery -- those cracks in the earth that formed, that we've all been seeing, you know, on CNN, the speed of lava flow," Trevorrow said.

Some of the computer-generated characteristics of lava in the film mirror what is actually happening in Hawaii and Guatemala, Trevorrow added.

"It was interesting for me to watch, you know, with the speed of the Kilauea lava flow that started off so slowly and grew faster and faster to the point where it was as fast as our lava," he said.

Actor Justice Smith, a newcomer to the "Jurassic" franchise, said the film's release timing is an "unfortunate coincidence" and that his "heart goes out to the people that are suffering over there."

Daniella Pineda, another emerging actress who plays a central role in the new movie, expects people who have had to endure the deadly and destructive volcanoes in Guatemala and Hawaii will be affected by the fictional depictions of roaring lava.

"I think it will definitely evoke emotion," Pineda said. "I know I felt that way because of all the recent volcanoes and the timing of that in our fictionalized world. Yes, it was just a pure coincidence. It's just very unfortunate."

Director J. A. Bayona was hesitant to draw parallels between fantasy and real-world disasters.

"In this case, I think it's a movie to have fun," Bayona said. "Of course, it's terrible what's going on right now Guatemala or in Hawaii, but I don't see the connection in there."

Bayona also oversaw the making of "The Impossible," which was based on the true story of a tsunami in Thailand. Of that film, he said, "you feel the responsibility of telling a true story."

Longtime "Jurassic" actor Jeff Goldblum echoed the sentiments of the rest of the cast.

"It's coincidental because of course they didn't know," Goldblum said. "I'm just concerned about, you know, the effects of it and the impact ... and hope everybody's OK and makes it out OK."

CBS affiliate KGMB reported Thursday large earthquakes and steam explosions at Kilauea's summit have been taking place almost daily over the last few days as eruptions at the volcano continue. The activity is following a "fairly reliable pattern," according to scientists.