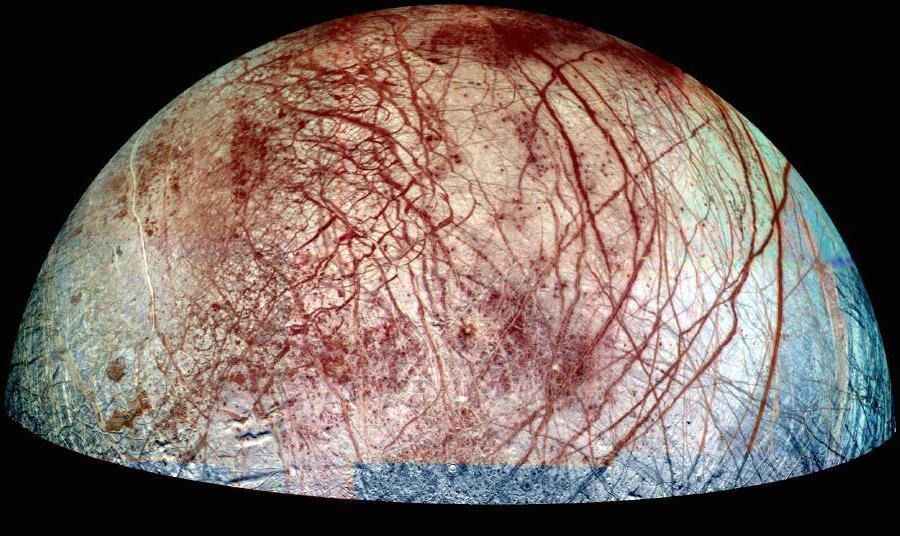 At first blush, it looks like a bloodshot eyeball.

But this is actually Jupiter's moon Europa, as seen in a composite of images sent back from NASA's Galileo spacecraft during its many years orbiting Jupiter, from 1995 to 2003.

The unnervingly biological-looking red scars crisscrossing Europa are cracks and ridges marking weak lines within the moon's ice crust, emphasized and exacerbated by the swelling and falling of tides due to Jupiter's gravitational pull.

Some of these ridges are thousands of miles long. The startling color is due to contaminating minerals rising from beneath the icy crust, possibly salts from the underground ocean. The regions of mottled red are chaotic terrain, parts of the moon's surface with disrupted icy material that has been broken and shifted around.

The images is part of a trove of data from Galileo that among other things has lent credence to the theory that Europa hosts a deep underground liquid ocean. The mission also detected clay-like minerals in the moon's icy crust and evidence for an exosphere - a thin atmosphere where molecules remain gravitationally trapped - around Europa and Jupiter's other moons Ganymede and Callisto.

Europa, Ganymede and Callisto will be explored further by ESA's JUpiter ICy moons Explorer mission when it reaches the system in 2030. Europa is also earmarked for further attention by NASA, which will launch its mission some time in the 2020s.