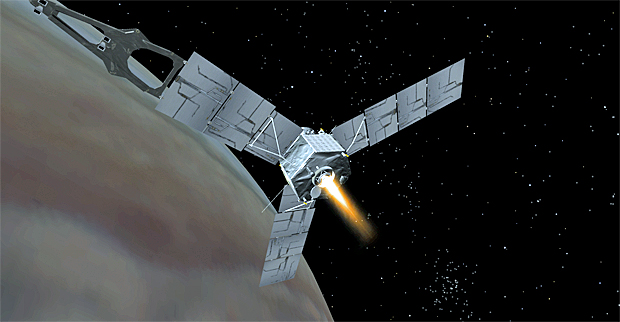 Traveling at a mind-boggling 130,000 mph relative to Jupiter and spinning at 5 rpm for stability, Juno's main engine ignited at 10:30 p.m. EDT (GMT-4) and burned for 35 minutes as planned, slowing the craft by about 1,212 mph. That was just enough to bend the trajectory into the designed polar orbit.

Adding to the drama, the rocket firing occurred deep inside Jupiter's seething radiation belts, "the scariest part of the scariest place that we know about," said Heidi Becker, the lead on JPL's radiation monitoring team.

"These are high energy electrons that are moving at (nearly) the speed of light because Jupiter's magnetic field has accelerated them to the point where they will go right through a spacecraft and strip the atoms apart inside your electronics and fry your brain if you don't do anything about it," she said.

As if that wasn't enough, Juno also flew through a tenuous ring, or disk of debris around Jupiter that scientists know very little about. At Juno's velocity, a collision with even a grain of dust could have been catastrophic, depending on what was damaged.

But Juno's orbit was designed to minimize the radiation threat and the spacecraft's flight computer, navigation equipment and critical electrical systems are housed in a titanium vault with walls a half-inch thick.

Protective software also was developed to ensure a quick engine restart if the flight computer suffered a radiation-induced fault. But there were no apparent problems and when signals reached Earth confirming a successful, full-duration burn, mission managers and engineers broke out in cheers and applause.

"We just did the hardest thing NASA's ever done! That's my claim," principal investigator Scott Bolton, with a bit of understandable overstatement, told the flight control team.

Before the rocket firing, Bolton described Jupiter as "extreme in every way," making it extraordinarily difficult to put a spacecraft into a close orbit around the huge planet.

"That all sounds OK, but I also look at it and I'm like, what were we thinking?" he joked. "But we've got the world's best engineers, we're doing everything humanly possible. I'm confident it's going to work, but I'll be happy when it's over and we're in orbit."

Launched five years ago atop a United Launch Alliance Atlas 5 rocket, Juno traveled a roundabout 1.7 billion miles to reach Jupiter, making a close gravity-assist flyby of Earth in October 2013 to pick up enough speed to finally set off after its quarry.

Operating in an ever-changing elliptical orbit around Jupiter's poles, Juno will make repeated low-altitude passes between 2,600 and 4,900 miles above the cloud tops to study the planet's atmosphere, its powerful magnetic field, the resulting radiation environment and to find out whether a rocky core lurks in the deep interior, possibly under a thick layer of liquid metallic hydrogen.

Other major objectives include understanding the dynamo powering the magnetic field and searching for water molecules, telltale evidence indicating where in the solar system Jupiter initially formed. A higher abundance of water would imply Jupiter formed farther out, where more icy material was available during the solar system's birth, and then migrated inward to its current location.

"Jupiter is sort of like a cake that's still cooling off after you've baked it," Jim Green, director of planetary science for NASA, said in an interview. "It's an enormous planet, it's hung on to all the original material in our collapsing cloud. And so by interrogating it, understanding its pressure density and temperature, we can really get a good idea about how it was put together."

Juno also is expected to shed light on the processes responsible for the Great Red Spot, an enormous cyclone large enough to swallow three or more Earths that has been swirling for at least three centuries.

"Juno's going to do a great job looking at the red spot," Green said. "Hopefully we'll understand how deep that cyclonic material goes into the planet. We're going to find out some really neat stuff about the climate on Jupiter, and the red spot is part of that."

"We have special instrumentation that looks deep in at the magnetic and gravity fields to see how it's spinning inside, how it is structured," Bolton said earlier. "Is there a core in the center of Jupiter? If there is a core of heavy elements, a bunch of rocky, icy material squeezed down in the center of Jupiter, it tells us something about the early processes of the solar system because that means rocks must have formed in the early solar system before Jupiter did.

"We don't really know if there's a core," he said. "That's one of the things Juno is going to investigate. If there is, then that tells you sort of when and how and a little bit of where Jupiter must have formed. That, tied with the water abundance, are two key discriminators in theories of how and where Jupiter formed."

Juno also is equipped with a visible-light camera called JunoCam that is on board primarily to provide imagery for public outreach.

"It's really a public camera," Green said. "We're going to be posting those images as they come in, right away. They'll have to be put together to get mosaics much like we do with some of the rovers down on Mars. ... We view this very much as a public camera."

Even though it is built like a tank, Bolton said, the radiation will eventually take its toll, reducing the spacecraft's useful life to less than two years -- 20 months, or 37 orbits. At that point, Juno will be ordered to crash into Jupiter's atmosphere to prevent any chance of a future collision with one of Jupiter's moons and contamination of any presumed sub-surface oceans.