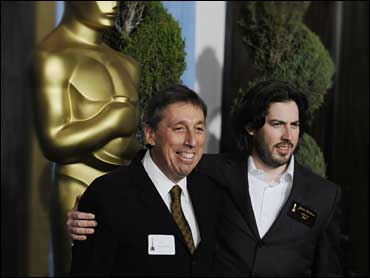 Jason Reitman is the Oscar-nominated director of "Juno," just his second feature film. He's also a second-generation Hollywood director, the son of Ivan Reitman, who directed comedy classics such as "Ghostbusters," "Meatballs" and "Stripes." In this Sunday Morning profile from The Red Carpet, correspondent Rita Braver talks with Jason about his little movie that's become a big hit.

As Hollywood stories go, this one is pretty good.

"Juno," a little independent movie, is a comedy about a pregnant teenager. Made for just seven-and-a-half-million dollars, it's become a hundred-million dollar hit and scored four Oscar nominations, including Best Picture.

"You have no idea how unreal it is," says Jason Reitman, the 30-year-old director of "Juno."

Reitman is the recipient of one of those Oscar nominations. A child of Hollywood, he used to hang out at the historic Village Theater in Westwood. Last December, his movie premiered there.

"This is a big theater, holds about 1,400 people," Reitman mused to CBS News correspondent Rita Braver.

"Were you worried no one would come?" she asked him.

"Yeah," he recalled. "Or, I mean, that it is half-full, or they don't react, they're just silent. And that first wave of laughter - there's nothing like laughter, 1,400 people at the same time - It just, oh, your heart swells!"

"I mean, he showed up on the set of 'Animal House' when he was 13 days old," Ivan told Braver.

Young Jason grew up steeped in Hollywood history. For example, Art's Deli in Studio City was the place Ivan and Dan Aykroyd first met to work on "Ghostbusters."

"And we basically decided to start the movie right here," Ivan remembered. "I think it was this booth right behind me."

"The first set I remember was 'Ghostbusters,' Jason Reitman told Braver. "It was a scene in which the street erupted. I remember even at seven years old thinking, 'Wow, if you direct a movie, you can break the streets of New York.'"

Jason grew up dreaming of a career in film, but not without worries.

"I would be destined to live in my father's shadow and always be unfairly compared to him," Jason said. "And I thought, why should I go after a career like that? And I went pre-med, thinking, well, no one ever questions why you become a doctor."

But Ivan Reitman is one father who didn't think his son should be a doctor. Ivan passed along what his own father said when he considered opening a business:

"'I don't think there's enough magic in it for you,' is what he said to me. And I told Jason exactly the same story."

And so Jason opted for the magic, striking out on his own, making short films and commercials.

"You would think that would be the case," he told her. "But actually, when you're the son of a famous film director, the presumption is that you're talentless, that you have no gifts."

"Yeah," Jason quipped, "the only door he opened for me was Art's Deli!"

It took five years for Jason to get his first feature film made. "Thank You for Smoking," a satire about a tobacco industry lobbyist, was a critical and commercial success.

Braver sat down with the father-and-son directors and asked Jason if he ever asked his dad for advice.

"I ask him for advice," Ivan interjected.

"You'd think he'd ask me for some," the father complained.

"I have one of the greatest comedy directors of all time on speed dial," Jason told Braver. "You don't think I'm going to call?"

But rarely does Ivan go to watch Jason work.

"When my dad's on the set, no one takes me seriously. Suddenly …"

"Do they take you seriously when he is not on the set?" Braver asked.

"Yes. They're - everything's fine. And then he shows up and there's a gravitational shift."

"That was more on 'Thank You for Smoking,'" Ivan admitted. "I remember just showing up for one hour."

Jason nodded as his father told the story.

When it came to his second film, "Juno", Jason Reitman fell for an unlikely script.

"I was told, 'You should read it.' It's a teen comedy written by a former stripper," he said laughing, "I can't imagine a description that'd make me wanna read it less."

But what he read knocked him out, and so did that former stripper who goes by the pen name Diablo Cody.

"I was really worried about meeting him," Cody said. "Because I assumed we were going to be so different. And then when I did meet him, it was a surprise because we were so similar."

Unlike many directors who banish writers from the set, Reitman wanted Cody there.

"Every day she informed how we made this movie," said Reitman, "from the smallest of details to production design, to just what it's like to be a teenage girl, something that I didn't have the privilege of being."

She credits him with the chance of a lifetime. At 29, she, too, is nominated for an Oscar and, she says, working with Reitman was a joy.

"We always worry that we sound so hackneyed about what a nice environment it was, but in this case we are telling the truth," Cody assured Braver.

"There's no sense of entitlement, of growing up rich and being, you know the son of the famous guy," said J.K. Simmons - and he ought to know. One of Reitman's poker playing buddies, he was in both "Thank You for Smoking," and now "Juno," playing the father of star Ellen Page.

"And he's got a kind of rough idea of how he wants to shoot it," Simmons explained, "and then he'll begin to just tinker and mold a little bit with everybody's performance."

"How do you see your style as a director?" Braver asked Reitman. "Are you low-key? Are you bossy?"

"I don't consider myself bossy," he told her, "but I do know what I want. You know, I have a gut feeling about a piece of material, but I've never envisioned myself as the director on top of the hill with a megaphone in my hand, screaming at 1,000 extras."

To keep to the budget, high profile stars like Jennifer Garner took cuts in their usual pay.

"Some things you do purely for the heart," said Garner, who plays the woman who wants to adopt Juno's baby.

With the surprising success of "Juno", everyone associated with the film has become a hot commodity in Hollywood, including Jason.

"I mean, you're 30 years old; it doesn't really get much better than this," Braver told Reitman.

"No. The best thing that could happen to me right now is if I just died, career-wise. Then I'd go down as a major director. Staying alive will only give me time to piss all this away," he said, laughing.

Braver pressed Reitman on his dire prediction, "Do you think there's any chance that will happen?"

"Yeah, the truth is, I'm gonna make some bad films. I'll make some more good films. I probably won't ever make a film that is received like this," Reitman said, "and with this success, it means that I get to make the next few films that are in my heart."

But no matter what happens, he'll always have that fateful morning.

"All of a sudden," Reitman remembered, "I just saw my photo on TV and my wife and I looked at each other and we were in a state of shock. My honest first thought was, 'Oh God, they've made a mistake.' My phone rang immediately, my father had called me."

"I suddenly saw his picture and realized that my son got nominated," Ivan Reitman marveled. "And I started crying just like I am now, and I had to call him right away."

This, an especially sweet moment, because Ivan Reitman has never been nominated.

"I should have known right then, you know?" said Ivan.

"And he said, 'Yes,' he was very gracious," the son remembered: "'If you get nominated, I'll go with you to the Oscars.'"

"Are you going to bring him?" Braver asked Jason.