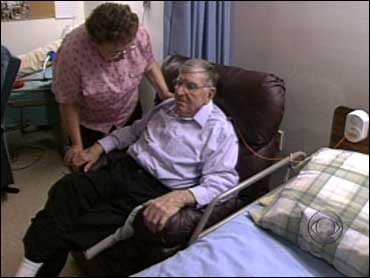 Spend one morning with Dr. Jeff Kerr and you'll understand why the Medicare drug benefit is so complex. Kerr is a nursing home doctor in Missouri. He tells CBS News correspondent Wyatt Andrews that he has 300 patients — and that he jumps hurdles every day.

For example, Alzheimer's patient Gene Lister recently improved on a drug called Aricept. But his insurance company just said no more Aricept until Lister takes a written mental health exam — by himself. According to his daughter, Linda Stukey, that's absurd.

"There's no way he can fill out any paperwork at all," she says. "He has lost the ability to read a sentence and remember from the beginning of the sentence to the end of the sentence what it means."

Says Kerr, "There is absolutely no reason why we need this (form) to get a drug."

CBS News then watched as Kerr got on the phone, trying to justify to insurance companies prescriptions he has already written.

On one call that took 25 minutes, Kerr was asked by one insurance plan to give a patient a drug for incontinence that he believed might be dangerous. "If I put my patient on this generic (medication), she will get more confused and she will fall," he told the insurer. "(It is) totally inappropriate."

But his biggest complaint came when several patients lay sick with infections. The insurance plans insisted he try the antibiotic cipro — when he was insisting cipro would not work.

"They got sicker, because it didn't cover their infection," he says. "They ended having to go to the hospital with pneumonia."

Kerr is juggling all these issues across several different plans, all with different rules — and 300 patients. Asked how many of the 300 are having trouble with Medicare Part D, he replied, "One hundred percent. Every one of them."

Medicare and the insurance companies that handle the drug benefit say they have solved — or will solve — every problem faced by Kerr. The industry recently adopted a standardized form that any doctor can use with any plan to appeal a drug denial. Government officials also say reducing the time doctors are spending on the phone is a top priority — so that physicians can return to treating patients.

Almost all of the hassles Kerr endures result from insurance company efforts to reduce costs. Kerr says he doesn't mind that, but he argues that for some patients, the plans are too inflexible and the high hurdles should come down.