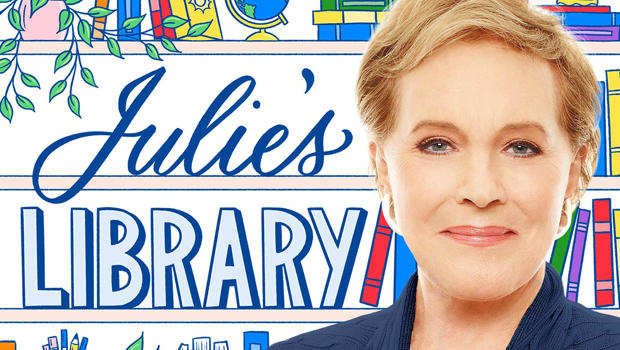 Even on the computer at her Long Island home, Julie Andrews can still command a screen, while making the best of this odd time.  "It reminds me of the war days, this particular time; I don't know if it does for anybody else," she said.

Correspondent Tracy Smith asked Andrews, who was a young girl in London during World War II, "Are there any lessons from that time that might apply to this time?"

"It's a recognition, actually; it is another kind of war," she replied. "It's something that I've certainly never come across before in my life, and I don't think many of us have. It's like a very surreal science-fiction movie in a way. It's hard to grasp that it's real, and yet you know that it is."

It's probably fair to say that say Andrews has had a lifetime of surreal moments: At 13, she sang in a command performance for King George VI. At 20, she conquered Broadway as Eliza Doolittle in "My Fair Lady."

And she won an Academy Award for her first film role, as Mary Poppins.

"I trained her well, as you can see," Andrews noted.

When "Mary Poppins" was released in the summer of 1964, Emma was barely two, and a true child of Hollywood.  "I went shopping with my nanny at the time in the children's section of a department store," she recalled. "And there was a display set up of Mary Poppins, cardboard cutouts, life-size figures of Mary Poppins. And I remember stopping and looking and pointing and saying, 'That's my mommy!' And then suddenly becoming aware that a couple of women behind me were saying, 'Isn't that sweet? That little girl thinks her mother is Mary Poppins.' And I was like, 'No, but that really is my mommy!'"

And now, in a way, Hamilton has become her mother's co-star.  Together, they've written more than 30 children's books, and this week they'll debut a new podcast, "Julie's Library," where listeners can hear stories read in a very familiar voice.

Hamilton said, "We're hoping that these stories will bring families together, will bring all of us together."

Andrews added, "And encourage reading and literacy and, I mean, all those subliminal things that go along with enjoying a good book."

It all sounds "practically perfect," but Andrews' transition from legendary songbird to children's author was, by her own admission, difficult. In 1997 she lost her four-octave soprano singing voice after vocal cord surgery.

Smith asked, "When you lost your voice, did you see a blessing in that?"

"I didn't at first," Andrews said. "I must be truthful. That was one of the hardest things to deal with. And I did think it was maybe one of the worst things that could possibly happen, because I enjoyed and love singing so much.

"I knew I was gonna go crazy unless I did something that felt creative and that I enjoyed. And the timing of it was exactly right, because Emma and I began to write together our children books. And it became the thing that I embraced when my voice had gone. And Emma said to me one day one of the loveliest things, which is, 'Mom, you've just found a different way of using your voice.' And I think for me it's a great, great joy."

And as if writing a whole library of children's books wasn't enough, Dame Julie has also written a couple of best-selling memoirs.

Smith asked, "You've worked your whole life, since you were a young girl. Do you find comfort in that, in working? Because you're keeping busy now working on several things."

"Yes. I have worked all my life. I don't think I know to do anything – I mean, I love kicking back. Believe me, I'm quite a lazy girl a lot of the time! But having something to do that I love is very necessary. And I am used to being busy. I don't think I would be very happy if I weren't."

It almost seems as if Andrews has become a little like Maria, the perpetually-positive governess in "The Sound of Music." She's the character who showed her family, and the world, how to deal with adversity – and in a way Andrews still is, especially now.

Smith asked Hamilton, "I think so many of us have learned lessons from your mom's characters in the movies. I mean, I think about, in this time, you know, focusing on my favorite things. And I'm wondering, to you personally, are there lessons that you've learned from your mom that maybe apply now?"

"Absolutely," Hamilton replied. "I share my mom with a lot of other people who wished that she was their mom. And I totally get it. 'Cause she's a fabulous mom. The lessons that jump out at me the most, perhaps one is, when in doubt, stand still."

"I was just gonna say that, sweetheart!" Andrews interjected. "We finish each other's sentences. And right now that's so applicable."

"And it is very applicable right now," Hamilton said. "When it doubt, stand still, and wait until the way forward is clear."

Andrews added, "And there was another one that my mother used to say – actually my mother and my aunt. They used to say, 'This will have a beginning, a middle, and an end, and so just wait it through.'"