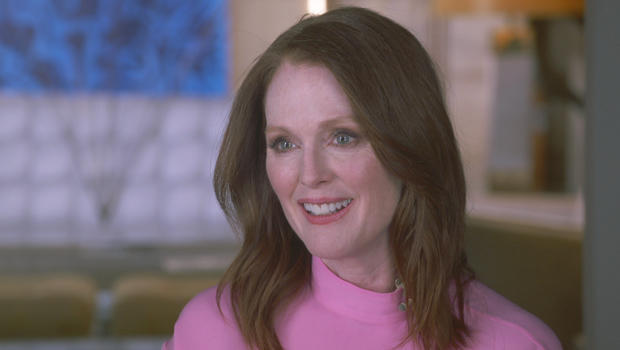 Actress Julianne Moore should be exhausted … not because of her 75-plus film credits – the cult classics ("The Big Lebowski"), the blockbusters ("The Hunger Games: Mockingjay"), the comedies ("Crazy, Stupid Love," "Suburbicon"), and lots of drama ("The Hours," "The End of the Affair," "Still Alice"). If she's tired, it's only because she'd had a bad night. "My little dog threw up twice," she said. "So, I woke up a lot."

"And were you at all thinking then about, 'Oh no, the 'Sunday Morning' interview! I'll never sleep!" asked Jane Pauley.

"Yes! 'I've gotta see Jane Pauley and I'm gonna look terrible!' And why? I slept fine the other night. Why did it have to be tonight that the dog threw up? And then did it again an hour later!" she laughed.

Besides the dog, she lives with director Bart Freundlich, her husband of 15 years. They have two children.

"You've managed to be this prolific actress who seems to have a pretty authentic family life," said Pauley.

"Thank you. I am very proud of my family. They're great. They're wonderful kids. And I wouldn't have been able to do it if I didn't have a partner like Bart."

"What was it about you that made being prolific an option?"

"I always say that I'm industrious! I like to work. I love what I do. I'm like, 'Oh my God, after all these years I'm still interested in doing this.' But I am."

"It shows – either that, or you're acting. How would I know?"

Longtime daytime TV fans might recognize a young Julianne Moore, as Frannie Hughes and Frannie's evil half-sister AND cousin, Sabrina, on "As the World Turns."  "We had the same dad, and our moms were sisters, which was so disgusting!"

At 28, she won an Emmy, though the movie star we know today didn't make a film until her 30s. And then her career took off, with indie classics and box-office hits. But despite her resume, she says she does feel insure that she won't keep getting job offers. "Oh of course. We all do. All actors do. We are self-employed, you know? And talk to anybody who's self-employed, the minute that job is over, you have to find another one.

"So, people always say, 'Why do you worry that, you know, it'll go away?' And I always say, 'Because it's not unprecedented!'" she laughed.

Four years ago, at 54, Moore received her fifth Oscar nomination playing a college professor with Alzheimer's disease in "Still Alice."

So, what is it like to wait, not knowing if your name will be called? "Well, I will tell you, by the time you get to the Oscars, people generally know who's going to win," Moore laughed. "That being said, I think it's always hard, because you have to find a way to feel natural when it's the least natural thing in the world.

The oldest of three, she was born at Fort Bragg. [Her father was a military judge; her mom was a psychiatric social worker.] She was Julie Smith, until she graduated from college: "When I got my first job, you can't have the same name as any other actor in the union. And Anne is my middle name and was my mother's first name, and Moore is my father's middle name. And I wanted to make sure that I used both of their names professionally, so I didn't hurt anybody's feelings."

She says she feels her parents' influence when choosing roles: "I look back and I think about all the conversations that we had at dinner about who people are and why they did what they did. It's fascinating to me. That's what you're always kind of looking at."

Moore said, a common thread among the characters she's played, despite their being so different, is "they're generally a woman that people don't see. So, she's not always the person that you would consider to be at the center of the story."

Which describes the opening scene of Moore's latest film, "Gloria Bell," the early reviews of which have been glowing. "One of the movie's descriptions," said Pauley, "is a woman looking for love on the dance floor. But what else?"

"I think it's an exploration of a woman's life. It's a way to take a lens to an ordinary woman's life, to really see who she is, and to watch her in all the minutia of her day. To watch her interact with the people that she loves and she cares about."

And it also dramatizes the immensity of one's life. "If you were being filmed, you would say, 'Oh, well, maybe it's not, you know, immense enough for a movie,' but it is. This is a movie about the enormity of personal experience."

Just as the film celebrate a woman in "middle age," what is the significance of age to Moore, now 58, in an industry where actors and actresses often tiptoe around that topic?

"I don't think we have to anymore," Moore said. "I don't think we should anymore. I think we devalue ourselves by doing that. We know that everywhere you are in your life, it's interesting to you. So why shouldn't it be compelling to the rest of the world, too?"

To watch a trailer for "Gloria Bell," click on the video player below.