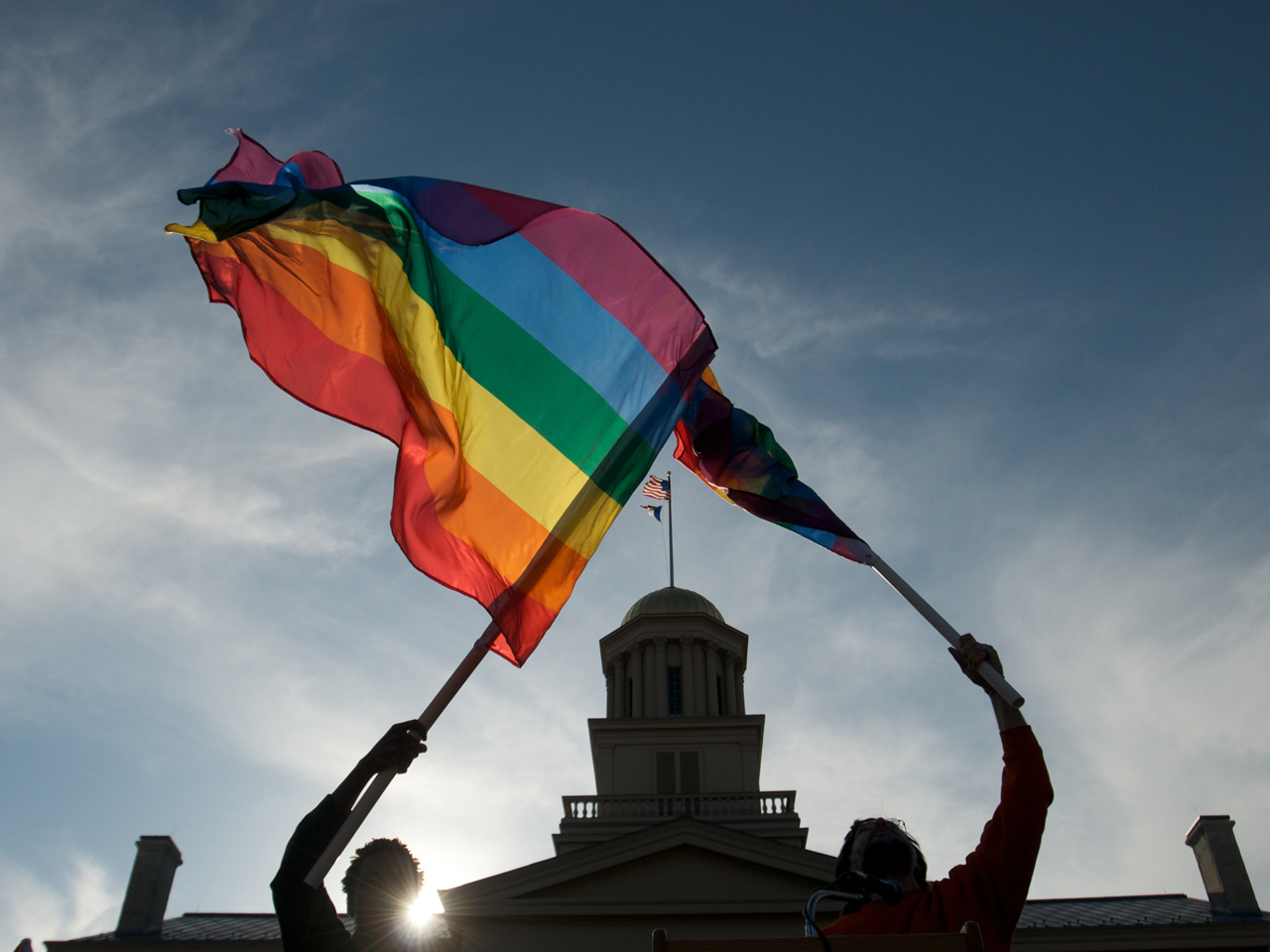 CINCINNATI -- A federal appeals judge hearing arguments about gay marriage bans in four states says "it doesn't look like the sky has fallen" in other states that allow same-sex marriage.

Judge Martha Craig Daughtrey made the comment Wednesday in Cincinnati as she and two other judges on the 6th U.S. Circuit Court of Appeals questioned lawyers on both sides during the biggest court session yet of federal legal battles over gay marriage. They were hearing cases from Ohio, Michigan, Kentucky and Tennessee.

Another judge, Jeffrey Sutton, repeatedly asked whether trying to get the issue changed before the U.S. Supreme Court was the right course instead of waiting for popular change.

The judges didn't indicate when they would rule in the cases.

Michigan's and Kentucky's cases stem from rulings striking down each state's gay marriage bans. Ohio's case deals only with the state's recognition of out-of-state gay marriages, while Tennessee's is narrowly focused on the rights of three same-sex couples.

Michigan's solicitor general, Aaron Lindstrom, opened the afternoon by saying that any change in the state's ban on same-sex marriage should come through the political process.

"The most basic right we have as a people is to decide public policy questions on our own," he said.

Fundamental constitutional rights shouldn't be decided in popular votes, countered attorney Carole Stanyar, who represents the plaintiffs in a case that began when a lesbian couple sued over state law barring them from jointly adopting their children.

"The Michigan marriage amendment gutted the democratic process," she said.

Attorneys on both sides in the Michigan and Ohio cases were to go first and get a half-hour each to make their cases. Kentucky and Tennessee will follow, with 15 minutes for each side from both states.

In nearby Fountain Square, advocates held up banners and signs urging freedom to marry or other messages in favor of the legal challenges to the bans. The crowd included couples who married in states where same-sex marriages are legal and other longtime couples who said they are waiting for it to become legal in their home states.

"It's to make a statement, really," Bradford said. "We want to be married."

He said they were hopeful the court will rule in favor of same-sex marriage.

About a dozen gay marriage opponents prayed the rosary outside the courthouse.

"I'm just praying for God's will to be done," said Jeff Parker, 53, from the Cincinnati suburb of Madeira. He said he believes that marriage should be between a man and a woman but is concerned about the court challenges.

"They've gotten it wrong before," Parker said. "I don't have a lot of faith in the courts."

Since the U.S. Supreme Court struck down part of the federal Defense of Marriage Act last year, gay marriage advocates have won more than 20 victories in federal courts. No decision has gone the other way in that time.

Sutton is considered the least predictable, shocking Republicans in 2011 when he became the deciding vote in a 6th Circuit ruling that upheld President Barack Obama's landmark health care overhaul.

If the 6th Circuit decides against gay marriage, that would create a divide among federal appeals courts and put pressure on the U.S. Supreme Court to settle the issue for good in its 2015 session. And should the high court decide to hear a case on same-sex marriage, the Department of Justice will file a brief urging the court to uphold the rights of gay couples to wed, Attorney General Eric Holder vowed last month.

"I think we will file a brief that is consistent with the actions we have taken over the past couple of years," Holder said. "When you have differentiations that are made on the basis of sexual orientation, they should be subject to heightened scrutiny. That being the case, I think a lot of these measures that ultimately will come before the Court will not survive a heightened scrutiny examination."

Two federal appeals courts already have ruled in favor of gay marriage, one in Denver in June and another in Richmond, Virginia, last week. On Tuesday, Utah appealed the ruling from the Denver-based court, asking the U.S. Supreme Court to take up the case and uphold the state's ban.

The 6th Circuit is the first of three federal appeals courts to hear arguments from multiple states in August and September.

The 7th Circuit in Chicago has similar arguments set for Aug. 26 for bans in Wisconsin and Indiana. The 9th Circuit in San Francisco is set to take up bans in Idaho and Nevada on Sept. 8.

Gay marriage is legal in 19 states and the District of Columbia.