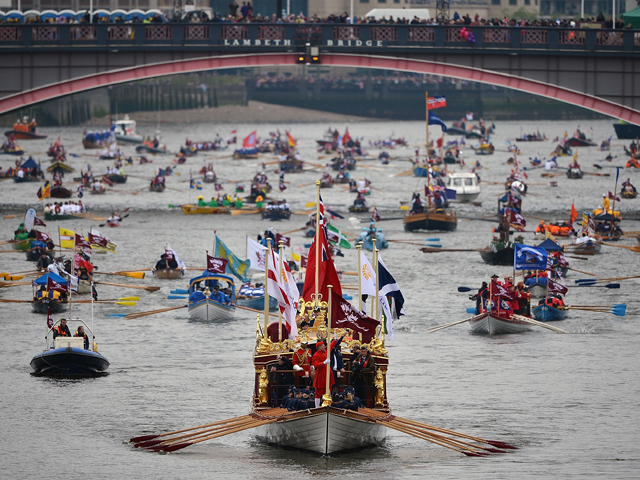 (CBS News) It's another busy day of celebrations in the Diamond Jubilee, marking Queen Elizabeth II's 60 years on the throne.

But the celebrations aren't just in London. The four-day celebration is being marked in all the countries in which Elizabeth is head of state. In New Zealand, a bonfire beacon was lit Monday - one of the many being lit across the queen's realm.

The queen herself - once she presumably warms up from her travails of Sunday - will light the last beacon in London Monday night after another series of events.

But people are still talking about the spectacle on the River Thames Sunday when more than a million people lined the banks of the waterway, braving some nasty weather to watch a display of pageantry that was truly fit for a queen. Nothing harks back to the days of glory when Britannia ruled the waves like a river full of a thousand boats and with the Queen on a royal barge at the head of them, as it was Sunday. This being the 21st century, the royal barge was a converted river cruiser made fit for a queen - but it's the thought that counts.

And boy did she have company: The crowd, which stretched for miles along the riverbank and across its bridges, was estimated at well over a million. And if the weather was cold and wet, so much the better for demonstrating the quality the British so much admire in themselves and in their Queen - pluck.

The pageant was a very British event, even down to the weather. There hasn't been a river pageant for 350 years, and it may be at least that long before the next one. The inspiration for the pageant came from an old painting by Canaletto of a river pageant in the 1700s. The River Thames was then London's main street, and for a day on Sunday, it was again.

The celebration was also about creating nostalgia for the future - and it supplied images galore.

This four-day celebration is taking many forms. Nothing would take this queen away from the year's biggest horse race, so Epsom Derby Day was conveniently folded into the weekend's events.

And for those not able to get to the big festivities, there have been hundreds of small street parties held across the land.

But, what people will be talking about was the lasting image of an 86-year-old woman, standing in the rain, watching the boats go by and returning the tribute to her people.