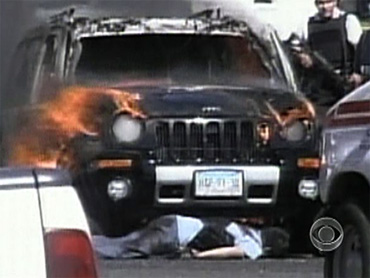 Drug violence is out of control in Mexico. Thursday, President Felipe Calderon suggested prosecutors and judges aren't doing enough to bring criminals to justice. Calderon himself has come under criticism. Since he declared war on the cartels in 2006, 28,000 people have died. This year alone, more than 7,000 have died. The violence has taken a new turn.

A cameraman in Juarez barely escaped a grenade attack. Back in his newsroom, Juarez news director Edgar Roman has a new job description. He wants to "preserve the lives of the people out there reporting, covering stories. We don't want to be heroes."

Those involved in news coverage in Juarez have a saying that's also a warning: a journalist can stay alive sometimes - based on what they don't report.

"You have to censor yourself in a way that you're not going to get in trouble," Roman said.

Almost a dozen journalists have been killed this year. Recently, four journalists were kidnapped, until their TV outlet broadcast a message dictated by one of the cartels. Many are concerned that stories are now being hushed up by terrified reporters.

Before the drug war started in 2006, Americans were advised to avoid border areas. Now, Americans are being warned away from all of Mexico, especially the northern third of the country. Some now fear that Mexico is spinning out of control.

Does the violence mean the drug cartels are running scared?

"As terrible as it is, it could be a step forward," said Andrew Selee, Director of the Woodrow Wilson Center's Mexico Institute. "We're seeing the cartels for the first time, fearing the government, fearing the rule of law in Mexico."

This drug war is fought with American weapons for the American market. Of the 75,000 guns seized, 80 percent came from the U.S. They're used to fight over an estimated $40 billion drug business - virtually all for the U.S. Think of it this way - $40 billion is nearly as much revenue that Pepsi collected last year.

When Mexico's President Felipe Calderon came to Juarez, he met Luz Maria Davila, whose two sons were killed. Her only children Marcos and Jose were at a party for the Double A baseball team. Gunmen thought the party was for a cartel gang also known as Double A, and killed 13 people - mostly teenagers. She said she spoke to Calderon, because she still hopes "for justice."

But Juarez is seeing escalation of violence - a car bomb was recently used to hit paramedics trying to save a life. Paramedic Nancy Paz Mares was hit by shrapnel. She said the person who did it "has no heart."

Paramedic Philip Caldera still has dizziness from his head injuries. He called it an attack like 9/11. "They just wanted to kill many people," he said.

Juarez has become the murder capital of the world, with 2,600 dead last year. The death toll could be higher this year. It's on track to hit 3,000.

Many Mexicans feel that their country is in the midst of chaos that could break it apart - all so Americans can get their fix.