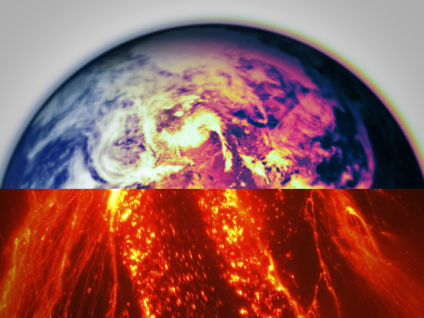 File this one away under the rubric of "thinking big."

A half century after scientists failed on their first attempt to penetrate the Earth's mantle, geologists Damon Teagle of National Oceanography Center in Southampton, England and Benoit Ildefonse from Montpellier University in France say it's time for a second try. And unlike their predecessors, they have the technology to turn that challenging endeavor into a reality

The goal is to retrieve samples from the Earth's mantle, a feat which, if successful, would supply a trove of new information about our planet's origins and history. Scientists still don't have a good idea how magma moves through the upper mantle and into the crust. Nor do they know much about the coupling of the crust and the underlying mantle - that is what's pushing or pulling what. Thus the intrigue of burrowing into a region still untouched by human exploration.

"If we could recover pristine samples of mantle rocks then we could make better estimates of the composition of our planet - and have a better understanding of how our planet has evolved and "differentiated" into the spheres (crust, mantle, core etc)," Teagle wrote in an email interview with CBSNews.com.

"A pristine sample of say 500 meters of the upper mantle could liberate answers to these questions and much more," according to Teagle. The search for a potential drill site in the Pacific will start this spring, with an eye on beginning the project later in the decade. The three most likely sites up for consideration include the coasts of Hawaii, Baja California and Costa Rica. Once work gets underway, it will take between 18 months and 2 years to reach the Earth's mantle.

The first time scientists attempted to penetrate the Pacific Oceans crust - in the spring of 1961 - the novelist (and amateur oceanographer) John Steinbeck went along for the ride, chronicling the expedition for Life magazine. But the project had only limited success - it took some core samples from the top part of the ocean's crust near Guadalupe Island in the eastern Pacific Ocean - and Congress canceled its funding five years later.

But Teagle noted that deep ocean drilling has come a very long way in the last 50 years, largely as a result of the experience of scientific ocean drilling "and because the offshore petroleum industry has moved into deeper water." He pointed to advances, such as thrusters, transponders and GPS technology, to hold the ship in place in very deep water and allow researchers to routinely re-enter holes to replace drill bits, which typically wear out after about 50 hours of use.

"We also have a much better understanding of what we are trying to do - we have good understanding of how the ocean crust is formed and the difference between the crust and the mantle. However, some details remain elusive," he added.

That's not to say all the technical hurdles have been cleared away. The project will depend on improved drill bits, tools and instruments that can work at very high temperatures of around 300 degrees Celsius.

National Geographic
Drilling into the planet

In publicizing their interest in the journal Nature, Teagle and Ildefonse wrote that while reaching the mantle posed the biggest challenge in the history of Earth science, it also offered an extraordinary reward - nothing less than "a legacy of fundamental scientific knowledge, and inspiration and training for the next generation of geoscientists, engineers and technologists."