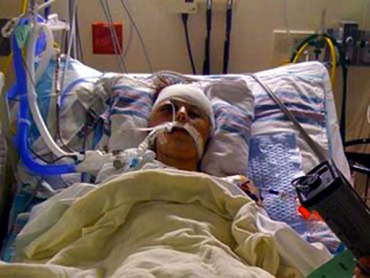 FORT LAUDERDALE, Fla. (CBS/AP) Florida middle school student Josie Lou Ratley, who was brutally beaten and kicked in the head by a fellow student wearing steel-toed boots, is starting to show signs of improvement, but remains in a medically induced coma.

Rick Freedman, the lawyer for the 15-year-old girl, says doctors at Broward General Medical Center have begun reducing the coma-inducing medication Ratley has been receiving for the last two weeks.

He says the teen is starting to move slightly in her bed.

Doctors tried weaning Ratley off the drugs last week, but had to administer them again when she developed a high fever.

According to investigators, the 15-year-old boy punched and stomped on Ratley with steel-toed boots. The attack was sparked by disparaging text messages from Ratley's cell phone to Treacy, according to the Broward County Sheriff's office.

Treacy is being held at a juvenile detention center on a charge of premeditated attempted murder.

Ratley was recently visited by Michael Brewer, a teen from the same school who was set on fire, allegedly by classmates.