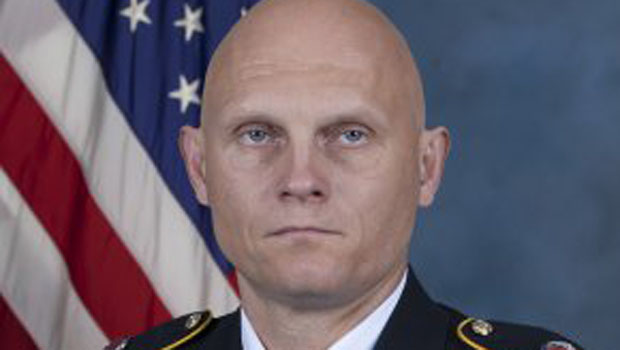 BAGHDAD -- The first American soldier to die in combat against the Islamic State of Iraq and Syria (ISIS), in Iraq has been identified as Master Sgt. Joshua L. Wheeler, coalition officials said Friday.

Army Col. Steve Warren told The Associated Press that Wheeler, 39, was killed a day earlier when he and dozens of U.S. special operations troops and Iraqi forces participated in a daring raid in northern Iraq, freeing approximately 70 Iraqi prisoners from captivity.

The Department of Defense said Wheeler died from wounds caused by small-arms fire during the operation. A native of Roland, Oklahoma, Wheeler is the first American to die in combat since the U.S. launched Operation Inherent Resolve, its campaign against ISIS, last year. His identity was initially withheld pending notification of relatives.

In a statement, the Army said that Wheeler was assigned to Headquarters, U.S. Army Special Operations Command, Fort Bragg, North Carolina. He graduated in 1994 from Muldrow High School in Muldrow, Oklahoma.

"This is someone who saw the team that he was advising and assisting coming under attack, and he rushed to help them and made it possible for them to be effective, and in doing that lost his own life," Defense Secretary Ash Carter told a Pentagon news conference Friday afternoon.

Carter portrayed Wheeler as a hero and said he would be present when Wheeler's body is returned to the U.S. on Saturday.

"As the compound was being stormed, the plan was not for the U.S. ... forces to enter the compound or be involved in the firefight," Carter said. "However, when a firefight ensued, this American did what I'm very proud that Americans do in that situation, and he ran to the sound of the guns and he stood up. All the indications are that it was his actions and that of one of his teammates that protected those who were involved in breaching the compound and made the mission a success."

"That is an inherent risk that we ask people to assume," Carter added. "Again, it wasn't part of the plan, but it was something that he did, and I'm immensely proud that he did that."

The raid targeted a prison near the town of Hawija and was undertaken at the request of the Kurdish Regional Government, the semi-autonomous body that governs the Kurdish region of northern Iraq.

CBS News correspondent Margaret Brennan reported that the American forces were there to advise and assist, not to be an assault force -- but that role changed when the U.S. troops saw the Kurdish peshmerga get pinned down in a heavy exchange of fire with ISIS fighters.

"That call was made on the ground," said a U.S. defense official.

Pentagon press secretary Peter Cook said Thursday that U.S. special operations forces had been asked to support an operation to rescue fighters with the Iraqi peshmerga, the Kurdish region's organized militia. The Kurdish government later said that none of the hostages were Kurdish.

The raiders killed and captured a number of militants and recovered what the Pentagon called a trove of valuable intelligence about the terrorist organization.

U.S. combat troops have rarely, if ever, participated directly in combat against ISIS fighters on the ground since the U.S. mission began in 2014. The U.S. has mostly limited its role to training and advising Iraqi and Kurdish forces, airdropping humanitarian relief supplies and providing daily airstrikes in IS-held areas of Iraq and Syria.