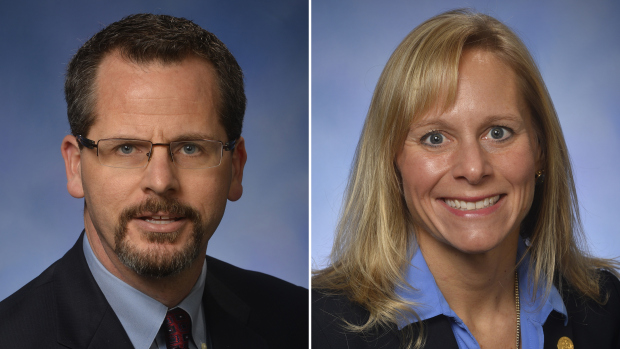 A former top aide to the two Michigan state lawmakers caught up in a sex scandal full of unusual twists and turns said he warned the pair to knock off their shenanigans, but they dismissed him.

At a news conference Monday, Joshua Cline, the former legislative director for GOP state Reps. Todd Courser and Cindy Gamrat, said he told the pair in January they needed to establish "professional boundaries" between their increasingly salacious personal lives (both are married to other people, but were apparently sleeping with each other) and their professional lives.

At that point, despite their districts over 100 miles apart, the pair had basically consolidated their offices into one physical space in which Courser would routinely get tucked it to sleep by Gamrat, Cline said. He also said he had in their shared office witnessed "long, romantic...hugs" between the outspoken social conservatives who base legislation on their Christian beliefs.

Cline also said the two would "disappear" for hours at a time, especially on Thursdays, and then return demanding food.

The former aide also confirmed rumors making the rounds in Michigan's political scene that on the morning of Feb. 11, he received a call from Joe Gamrat, the lawmaker's husband, who said he saw Courser leave Rep. Gamrat's hotel room at 2 a.m.

Courser has accused his staffers of attempting to blackmail him over the scandal. He said the attempted blackmail was why he admitted to orchestrating the distribution of a fictional email claiming he had sex with a male prostitute in a bid to conceal the extramarital relationship.

Ben Graham, who served as a House aide in Courser's office, recorded Courser in mid-May directing him to send Republican activists and operatives an email that would appear to be from an anonymous political enemy that said Courser had been "caught behind a Lansing nightclub" having sex with a man.

After Graham rejected the request, Graham said he had duties removed and was fired by Courser by early July. The sexually explicit email was received by Republicans on May 20 and 21, the two days following Courser's meeting with Graham. During the meeting, Courser read aloud portions of a draft email.

Graham and another staffer, Keith Allard, received healthy pay raises in June but were fired in early July. The third aide implicated in the scandal, Cline, quit in April.

Neither Courser, a married father of four, nor Gamrat, a married mother of three, directly confirmed or denied having a sexual relationship during the recorded conversations. But they also didn't dispute Graham's characterization of their relationship as an extramarital affair.

While the state legislature is investigating whether the legislators broke any laws in the course of the scandal, both freshman tea party favorites have said they will not step down.