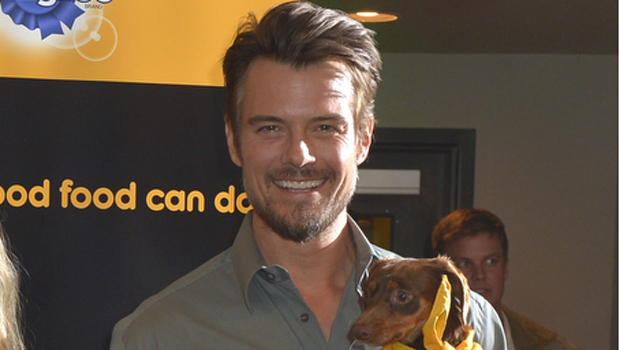 Josh Duhamel and Fergie’s house is a little more crowded these days. The couple, who already have a dog named Zoey, welcomed their first child, son Axl Jack, last August. And so far, everyone is getting along great, Duhamel says.

"He's [Axl] four-and-a-half months now. Now he's sort of getting interested in Zoey. At first he didn’t care about Zoey and Zoey didn’t care about him," Duhamel told CBS News. "She came up and sniffed him and then went about and did her own thing. But now it's funny to watch them sort of start to bond. Axl's really interested in Zoey. He loves watching her chase the ball. He reaches out and tries to pet her and pulls on her ears. And Zoey is much more interested because she sees him as a future ball-thrower -- he's like one of her recruits. So she's trying to teach him young -- how to toss the ball so she’s got somebody to play with."

The 41-year-old actor didn't always have pet in his life though. While growing up in North Dakota, Duhamel’s mom didn't let the family have a dog. But that soon changed once Duhamel was out on his own; that's when he got Zoey.

"When I got my own place -- when I moved to California I really wanted one," he recalled. "And I wanted a dachshund because a friend of mine had one and I loved it. So I went and bought one from a breeder. And then shortly after that I took a lot of crap from people at work saying, 'What are you doing buying when there's millions of dogs out there that are perfectly good companions at the shelters?' That was my first exposure to animal rescue."

So, when Duhamel and Fergie decided to get a friend for Zoey, they wanted to adopt. "We had a rescue dog that we just loved and he passed away a couple of years ago," said Duhamel. "He was such an awesome dog that I recommend anybody who maybe has an aversion to it -- who thinks dogs in shelters might be sick or have behavioral issues or something -- it's really just not true. They're actually better pets than anything you can buy from a breeder, in my opinion," said Duhamel, who became active with animal rescue causes a few years ago.

And that's why Duhamel was at the Sundance Film Festival earlier this week. He spent Monday in Park City, Utah, touring a shelter, which was filmed for a documentary on animal rescue. Part of Pedigree's "See What Good Food Can Do" program, the initiative encourages dog lovers to share their personal animal rescue stories online to help change the lives of shelter dogs -- for each story shared, a bowl of food will be donated to a shelter.

"We spent the day following the dogs from when they were brought in -- hungry and underweight -- just to kind of show what good food can do and how it makes a huge difference not only in the dog's life but it makes them that much more appealing for people to adopt," said Duhamel.

"It's really a key element to get these dogs to a place where they're adoptable...It makes a huge difference because so many of these dogs come in emaciated and hungry," he added. "They're sad and depressed because they're hungry. This really helps shelters sustain and give them the ability to maintain as many as these dogs as they can be adopted."

When he's not helping out shelter dogs and navigating fatherhood, Duhamel has been busy making films.

He can next be seen alongside Hilary Swank in "You're Not You," due out later this year. "Hilary is just amazing. She's somebody I've always wanted to work with and she’s fantastic in this movie," said Duhamel. "It's about this couple who has everything going for them…and then she gets diagnosed with ALS and the relationship and their lives sort of fall apart. It’s about reconnecting and realizing how much they love each other even in the face of this horrible disease. It’s a drama for sure, but it’s really a beautiful story."

He’s also making a cameo in the upcoming film "Don Peyote" with Anne Hathaway and Jay Baruchel. "It's a total trip…It's one of those movies that is hard to explain. A guy goes down the rabbit hole and ends up losing his mind," said Duhamel.

Next up for Duhamel? He's heading to Texas to begin filming the movie "Lost in the Sun." "It's a great story that we've been trying to make for a couple of years now," he said.