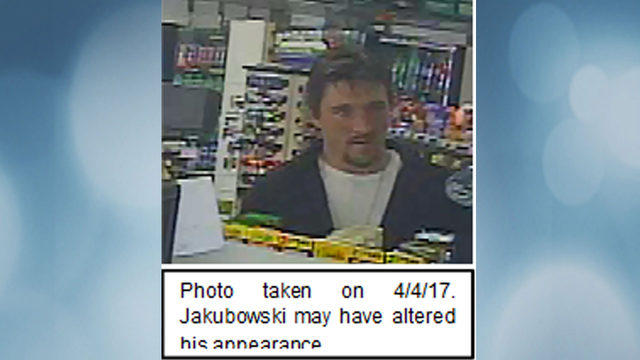 JANESVILLE, Wis. -- The hunt continues Monday for a man suspected of stealing firearms from a Wisconsin gun store who sent an anti-government manifesto to President Donald Trump and has threatened to carry out an unspecified attack, sheriff’s officials said.

Joseph Jakubowski, 32, has been missing since Tuesday, when authorities believe he stole a large quantity of handguns and rifles from the store in Janesville, 70 miles southwest of Milwaukee. He also acquired a bulletproof vest and helmet, and a burned vehicle registered to him was found nearby.

As of late Monday, investigators have been busy following 150 additional leads and tips, bringing the total to more than 500. Monday morning, additional federal resources were being called in to aid in the investigation, the sheriff’s office said.

Concerns ramped up late last week when a friend of Jakubowski gave a copy of the 161-page manifesto to police and said the suspect had also sent it to the White House. The Rock County Sheriff’s Office said Jakubowski also expressed anti-religious views in the document, and increased patrols near churches in the area Sunday.

“When you look at the document that he wrote, it’s really a long laundry list of injustices he believes that the government and society and the upper class have put forth onto the rest of the citizens,” Sheriff Robert Spoden said last week.

It is not clear if the White House has received Jakubowski’s manifesto.

Investigators say Jakubowski has made no specific threat. He remains at large, according to Rock County sheriff’s dispatcher Jenna Winiarski.

The Rock County Sheriff’s Office released on their Facebook page a surveillance image confirmed to be of Jakubowski, taken April 4 at a gas station in Janesville.

A number of possible sightings of Jakubowski were reported over the weekend, though none of them were confirmed, according to CBS affiliate WISC. Police in Sun Prairie said a sighting of a suspicious person outside a Lutheran church Thursday was not Jakubowski. The sighting prompted the church to cancel its Sunday services, WISC reports.

Police in Darlington said Sunday they received a report of a man matching Jakubowski’s description looking inside a Catholic church, and then leaving in a dark SUV. In a Facebook post, police said they were still trying to determine the man’s identity.

Darlington police didn’t immediately return a call for comment from the station.

The sheriff’s office said in a statement Sunday night that it had contacted school districts to inform them that Jakubowski is still on the run so they can make decisions on any precautionary measures. Many Rock County schools are on spring break this week.

About 150 local, state and federal law enforcement officers and support personnel are involved in the hunt for Jakubowski, the sheriff’s office said.

Jakubowski has had several run-ins with law enforcement over the years. Most were for traffic violations, though he has previously resisted arrest and once tried to disarm an officer, said Janesville Police Chief David Moore.