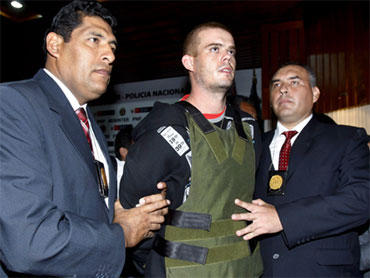 The lone suspect in the disappearance of U.S. teen Natalee Holloway was paraded - moist-eyed and looking stunned - before reporters on Saturday as Peruvians denounced him and detectives began interrogating him about the murder of a Lima student.

Joran van der Sloot arrived at criminal police headquarters in a brown Interpol SUV and was escorted across an auditorium of shouting, shutter-snapping journalists three times.

Wearing a green bulletproof vest, his hands handcuffed behind him, the husky 22-year-old Dutchman stared straight ahead and didn't respond to reporters' questions or even make eye contact.

"We're punishing him so that all the forces of evil are purged," one shouted.

About an hour earlier, onlookers yelled insults at the man who has dominated Peruvian front pages as he was transferred from a highway police station wagon south of the foggy coastal capital.

Chile deported van der Sloot at the countries' border on Friday and he was driven 17 hours north in a police caravan.

Chilean police spokesman Fernando Ovalle said the Dutchman told them he did not kill 21-year-old Stephany Flores, who was found battered with a broken neck on Sunday in his Lima hotel room. But van der Sloot did acknowledge that "he met her and at some point they went to a casino," Ovalle said.

He said that at 8:10 a.m., nearly an hour and a half before leaving the hotel, van der Sloot walked across the street alone, bought bread and two cups of coffee at a supermarket and returned to his hotel room.

Peru's interior minister, Octavio Salazar, reminded reporters that the murder investigation was not over.

"You need to be calm. We can't rush the matter, nor can we give details concerning the event or that investigation itself," he told a brief news conference.

"In two weeks we'll know if the girl had sexual relations or if there is alcohol in her blood," Dr. Cesar Tejada, the deputy Lima medical examiner, told The Associated Press in an interview.

The girl's father, Ricardo Flores, told the AP that video cameras had also tracked the couple as they walked before dawn Sunday to van der Sloot's hotel from a casino in Lima's upscale Miraflores district where the two met playing poker.

She had dropped two girlfriends off at their homes several hours earlier. El Comercio, citing a police report, said she sent a text message to one to tell her she was "walking up the stairs to my bedroom."

Guardia said he could not confirm the report.

Flores, a 48-year-old circus promoter and former race car driver, said he doesn't want the death penalty for van der Sloot, only justice. In Peru, murder carries a prison sentence of up to 35 years.

Van der Sloot remains the prime suspect in the May 30, 2005 disappearance of Alabama teen Holloway on the Dutch island of Aruba. He was arrested and released in that case, and faces no charges.

Flores told the AP in an interview at his home that the loss of his daughter may ensure that van der Sloot is punished for that death.

"My daughter was an instrument for this girl (Holloway), so that there can be justice," he said. "He's going to have to talk now."

Van der Sloot also now faces criminal charges in the United States of trying to extort $250,000 from Holloway's family in exchange for disclosing the location of Holloway's body and describing how she died.

U.S. prosecutors charged van der Sloot with the crime on Thursday, saying $15,000 was transferred to a Dutch bank account in his name. In the Netherlands on Friday, prosecutors acting on a U.S. request raided two homes seeking evidence in the case, seizing computers, cell phones and data-storage devices.

President Alan Garcia told reporters on Friday that van der Sloot would have to be tried in Stephany Flores' death before any extradition request could be considered.

A college business student less than a year from graduation, Flores was found late Tuesday in the Lima hotel room where van der Sloot had been staying since arriving in Peru on May 14 from Colombia.

She was fully clothed, with multiple bruises and scratches on her body but no signs she had been sexually assaulted, Guardia told the AP.

A tennis racket was found in the room "that could have been the murder weapon but that's so far not been proven," said Tejada.

"My daughter resisted," Flores told the AP. "Under the fingernails of my daughter there are traces, evidence, that's why they didn't permit her cremation." Flores said he expected her to be exhumed for DNA testing, and Tejada said that was likely.

Holloway, 18, was celebrating her high school graduation on Aruba when she disappeared. Van der Sloot told investigators he left her on a beach, drunk. That's the last anyone saw of her. Van der Sloot was twice arrested in her disappearance - and twice released for insufficient evidence.

Two years ago, a Dutch television crime reporter captured hidden-camera footage of van der Sloot saying that after Holloway collapsed on the beach he asked a friend to dump her body in the sea. But judges in Aruba ruled it insufficient to re-arrest him. The same journalist, Peter de Vries, reported later in 2008 that van der Sloot was recruiting Thai women in Bangkok for sex work in the Netherlands.