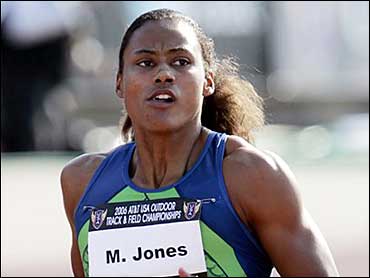 From the days when she a little girl, pigtails flying, streaking past the older boys in her southern California neighborhood, Marion Jones has defined her life with speed. Outrunning the doping suspicions was her toughest race of all.

Now, perhaps, the game is over.

After years of denial, the five-time Olympic medalist has tested positive for a banned drug.

The "A" sample from the 30-year-old sprinter, taken after she won the 100-meter title at the U.S. track and field championships in June, showed the presence of the performance enhancer EPO, a person familiar with the results told The Associated Press.

If a second "B" test is positive, Jones could face a minimum two-year ban.

Doping suspicions have dogged Jones for years, but she has always vehemently denied using any performance-enhancing substances.

One of her loudest accusers is BALCO founder Victor Conte. In a 2004 TV interview, he said he designed a doping regimen, which included EPO, for Jones and watched her inject herself with steroids before the 2000 Sydney Games. She responded by filing a $25 million defamation lawsuit that was settled out of court.

"I have always told the truth regarding my relationship with Marion Jones," he said in an email to The Associated Press.

Psychologist Rob Udewitz told CBS News correspondent Bianca Solorzano that it's not surprising that so many athletes are willing to take the risk of using a performance enhancing drug.

"Since it's become normalized, it almost makes sense that at that level an athlete will take that one extra step when they're doing so many other things to perform well," he said.

Messages left for Jones' attorney Richard Nichols on Saturday were not returned.

"Marion Jones has always been clear, she has never taken performance-enhancing substances, not now, not ever," Nichols said in a statement Friday to Reuters.

Now Jones, once the charming, dominating face of track and field around the world, must wait for the results of her backup sample to back up her words.

The positive test on the "A" sample was not for steroids, but for erythropoietin, also known as EPO, an endurance booster usually associated with distance runners. Only recently have sprinters been subjected to tests for the drug.

When former world 100- and 200-meter champion Kelli White told the U.S. Anti-Doping Agency that EPO was among the banned substances she had used, testing was expanded to sprinters.

"If you train harder, during that 10-plus seconds you will perform better," he said, adding there is disagreement in the scientific community over whether EPO does sprinters any good.

But continued allegations of doping certainly threaten the sport.

"It's a pity what has happened with Marion," pole vault world-record holder Yelena Isinbayeva of Russia said Saturday at a meet in Birmingham, England. "Of course, it's a big blow to athletics. It adds a black point to the sport."

Jones' results were the latest in what has become a drug-soaked summer for star U.S. athletes. Cyclist Floyd Landis tested positive for elevated testosterone levels after a tough Alpine stage on July 20, when he made a remarkable comeback and went on to win the Tour de France. Two days after news of Landis' positive test, 100-meter co-world record holder Justin Gatlin, who loudly had proclaimed himself the leader of a drug-free generation of track athletes, announced he had tested positive for testosterone or other steroids back in April.

Gatlin is trained by Trevor Graham, Jones' coach during the Sydney Games, who has been banned from U.S. Olympic Committee training sites. Several other athletes coached by Graham, who first alerted USADA to the designer steroid THG, have been suspended for doping.

For a time, it appeared track might pull away from its drug-tainted image.

So much had been invested in the squeaky-clean image of the young competitors and Gatlin's positive test came a shock.

But those who run the sport in the United States would not be sorry to see Jones go. Privately, they would like to see her and her baggage of suspicion disappear so the attention could move to as yet untainted young performers such as Olympic medalists Jeremy Wariner and Allyson Felix.

Jones' positive test came during what had been a triumphant return to the spotlight — a one-sided victory in the 100 meters at the U.S. championships in Indianapolis, her 14th national title but first since 2002.

She had been a national sensation since her early teens in the Los Angeles area, then moved to the University of North Carolina, where she excelled in track and helped the women's basketball team win the national title.

In 1996, Jones broke a bone in her left foot while working out with the U.S. basketball team.

Her 10.65 clocking in Johannesburg, South Africa, made her the second-fastest woman in the history of the event, behind only Florence Griffith-Joyner.

At the peak of her popularity, with a lucrative endorsement deal with Nike, Jones announced her goal of five gold medals at the Sydney Games. She ended up with three golds and two bronze, becoming the first woman to win five medals at a single Olympics.

But the shadows were gathering.

News broke in Sydney that then-husband C.J. Hunter, a shot putter, had tested positive four times in 2000 for the steroid nandrolone. At an emotional news conference Hunter sobbed as he proclaimed his innocence. Jones made a brief statement in support of her husband, then left.

A self-described nutritionist was at Hunter's side, trying to explain away the positive tests. His name: Conte.

The founder of the Bay Area Laboratory Cooperative was sentenced in October 2005 to four months in prison for his role in the distribution of steroids from the lab.

Montgomery set the world 100-meter record in Paris in September 2002. The couple had a son, Monty in June 2003, and both testified that fall before the federal grand jury in San Francisco investigating BALCO. In June 2004, The San Francisco Chronicle reported Montgomery told the grand jury Conte gave him weekly doses of THG in 2001.

The cloud of suspicion had begun to grow.

After taking the year off to have her son, Jones struggled in her 2004 comeback, looking nothing like the dominating, powerful sprinter she had been. She qualified for the Olympics only in the long jump. But in Athens, she also competed in the 400-meter relay, where the team was disqualified with a botched handoff from Jones to Lauryn Williams.

After leaving Athens empty-handed, Jones seemed to fade from the track scene.

Jones and Montgomery split up, and he retired from the sport in December 2005 after being banned for two years. He never tested positive but was punished based on testimony and other information gathered in the BALCO probe. Earlier this year, he and Jones' current coach Steve Riddick were indicted on bank fraud and money laundering charges. Both have pleaded not guilty.

Despite the tumultuous lives of those around her, Jones made a powerful return this year, running the season's third-fastest 100 in the world at 10.95 seconds.

"There are going to be people who will believe what they want to believe," she said before the Millrose Games in New York, "but I want to keep running, I believe in a drug-free sport."

At the U.S. championships she was greeted with cheers.

"I really want to thank everybody for their support," she told the crowd through the public address system. "I feel good. I'm back, and doing my thing."