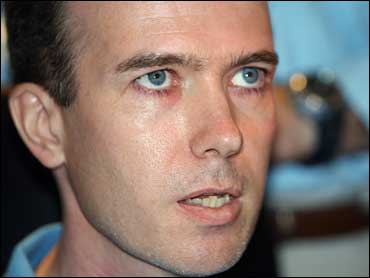 As more details of John Mark Karr's confession to the killing of JonBenet Ramsey surface, several aspects of the former schoolteacher's account raise questions about his role in the 6-year-old's death in 1996.

A source described the e-mails to CBS News as "hair-raising — to see what he'd done, or contemplated doing, to children." And an FBI source tells Moriarty that Karr once wrote an e-mail to Patsy Ramsey saying he was sorry and that her daughter did not suffer.

Karr will be taken within the week to Colorado, where he will face charges of first-degree murder, kidnapping and child sexual assault, Ann Hurst of the Department of Homeland Security told a news conference in Bangkok. Karr was given a mouth-swab DNA test in Bangkok, according to a law enforcement official, and will be given another DNA test when he returns to the United States, the official said.

"I was with JonBenet when she died," Karr told reporters Thursday, visibly nervous and stuttering as he spoke. "Her death was an accident."

Asked if he was innocent of the crime, Karr said: "No."

As Karr was escorted to his guesthouse by U.S. and Thai authorities to pick up his belongings, he told the AP: "I am so very sorry for what happened to JonBenet. It's very important for me that everyone knows that I love her very much, that her death was unintentional, that it was an accident."

Asked what happened when JonBenet died, he said: "It would take several hours to describe that. It's a very involved series of events that would involve a lot of time. It's very painful for me to talk about it."

Dressed in a baggy turquoise polo shirt and khaki pants, Karr said that JonBenet's death was "not what it seems to be," though he declined to elaborate. "In every way," he added, as authorities bundled him into a waiting vehicle, "it's not at all what it seems to be."

Some feared the case would never be solved — and as investigators failed to produce suspects, some suspicion fell on the girl's parents, John Ramsey and his wife, Patsy, who died of ovarian cancer in June.

Karr had been in Thailand five times over the past two years, arriving most recently in Bangkok on June 6 from Penang, Malaysia, Suwat said. He was looking for a teaching job in Thailand, Thai police official Lt. Gen. Suwat Tumrongsiskul Suwat said.

Suwat told reporters that Karr insisted his crime was not first-degree murder.

"He said it was second-degree murder. He said it was unintentional," Suwat said. He said Karr told Thai interrogators that he picked up JonBenet at her school and brought her to the basement. "He said he loved this child, that he was in love her. He said she was very pretty, a pageant queen. She was the school star, she was very cute and sweet."

The Thai officer quoted the suspect as saying he tried to kidnap JonBenet for a $118,000 ransom but that his plan went awry and he strangled her to death.

Karr's ex-wife said he often spent time reading up on the cases of Ramsey and Petaluma, Calif., resident Polly Klaas, who was abducted and slain in 1993. She also said she does not believe that her husband committed the crime.

His father told The Denver Post that while Karr was in college as an adult, a professor encouraged him to write a book about the Ramsey case after being impressed with a school paper.

"He researched everything he could about her," Wexford Karr said.

Hurst said Karr, who had traveled extensively across the world, may also be connected to a prior case in California's Santa Rosa County. She did not provide further details.

Asked how long he had been a suspect, she said, "A long time. I can't say specifically."