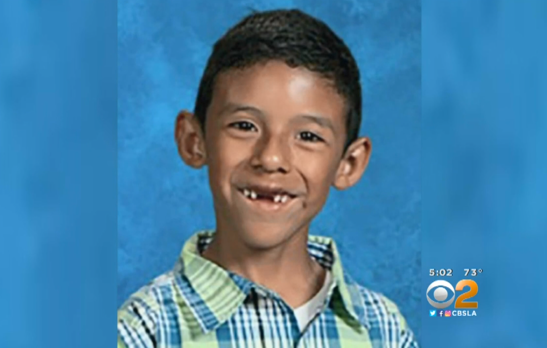 LOS ANGELES -- The 8-year-old student killed by a gunman in a classroom at North Park Elementary School in San Bernardino on Monday endured a great deal in his short life, CBS Los Angeles reports.

Jonathan Martinez was born with a rare genetic condition called Williams syndrome, had heart surgeries and lived with developmental delays.

While grieving for their only son, the boy’s parents asked school officials to tell the world about the condition that landed their child in the special-needs classroom, where he was killed.

San Bernardino Unified City School District Superintendent Dale Marsden said that the family wants -- in the boy’s memory -- the nation to be aware and conscious of what Williams syndrome is.

“Unlike disorders that can make connecting with your child difficult, children with Williams syndrome tend to be social, friendly and endearing,” Marsden said.

The Williams Syndrome Association released a statement Tuesday on the family’s desire to help bring awareness to the rare and potentially fatal disease.

“In a world where individuals are against one another and taking deadly actions every day, we could all learn a great deal from those with Williams syndrome whose most extraordinary gift is the gift of natural joy and understanding, and their incredible ability to share their joy with everyone they meet.”

Williams syndrome affects 20,000 to 30,000 people in the United States, according to the Williams Syndrome Association.

A GoFundMe page has been set up to help pay for Martinez’s funeral.

Martinez died after 53-year-old Cedric Anderson walked into a classroom full of special needs children Monday and opened fire with a .357 Magnum, targeting his estranged wife, Karen Smith, but also hitting two of her students. Anderson then killed himself.

Police said Martinez and a 9-year-old student were shot by accident.

The uncle of Smith described her as “gentle and soft-spoken and a quiet person,” CBS Los Angeles reports.

“There’s no one who would’ve been less deserving of this kind of thing than Karen was,” Henry Alexander said Tuesday. “She was a person who was always doing what she was supposed to be doing all the time. She was always doing the right thing. So this is kind of an ultimate irony.”

Alexander is a senior pastor at Shield of Faith Church in Pomona, which held a prayer vigil for Smith Tuesday night.

“She was a very quiet, very conservative person,” Alexander said. “If you look in the dictionary for ‘good girl,’ there’s her picture. She was just the embodiment of reasonableness and conservatism godliness.”

Anderson and Smith had only be married three months when the shooting occurred. Alexander said he was unable to attend their January wedding and had doubts about the marriage.

“I was very surprised to find out they were proceeding with a wedding,” Alexander said.

Smith, 53, was a mother of four and a grandmother.

Police said Anderson was able to enter the school by simply telling the front office staff he had something to drop off for his wife.