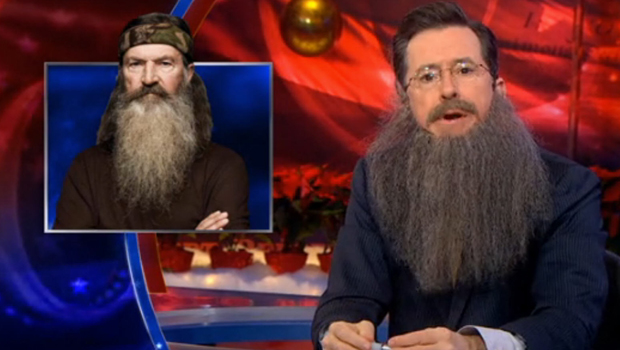 Jon Stewart and Stephen Colbert couldn't resist the opportunity to chime in on the "Duck Dynasty" controversy.

On their respective Comedy Central shows Thursday night, the comedians gave their take on Phil Robertson's suspension from his family's A&E reality series after making disparaging comments about gays in an interview with GQ magazine.

On "The Daily Show," Stewart began by admitting he doesn't watch "Duck Dynasty."

“I assumed it was a show in which ducks re-enact the show 'Dynasty' ... which, by the way, would have a huge gay following," he joked.

"I think what the guy said is ignorant, but I also have an inclination to support a world where saying ignorant [expletive] on television doesn't get you kicked off that medium," Stewart said of Robertson, adding, "I guess I stand with the free speech absolutists at Fox News, who don’t believe you should pressure people to have to adhere to cultural norms of speech. Mostly."

He then showed a montage of Fox News personalities expressing displeasure over some people and companies avoiding the word "Christmas" during the holiday season.

On "The Colbert Report," Colbert got in on the action by donning a fake beard and proclaiming, "Tonight, we are all Phil Robertson."

"This is a terrible day for Americans, though admittedly, a pretty good day for ducks," he said, before reading one of Robertson's GQ comments aloud and telling the audience it was "not the eloquent speech you might expect from a backwoods Louisiana bird murderer."

The TV host said he felt sorry for A&E because, "with this controversy, they may have lost 'Duck Dynasty"'s massive black and gay audience."

A&E said Thursday that Robertson has been put "under hiatus from filming indefinitely" from the hit reality series. Robertson has received support from Sarah Palin, Louisiana Gov. Bobby Jindal and others, and the family released a statement Thursday night saying it "cannot imagine the show going forward without our patriarch at the helm."