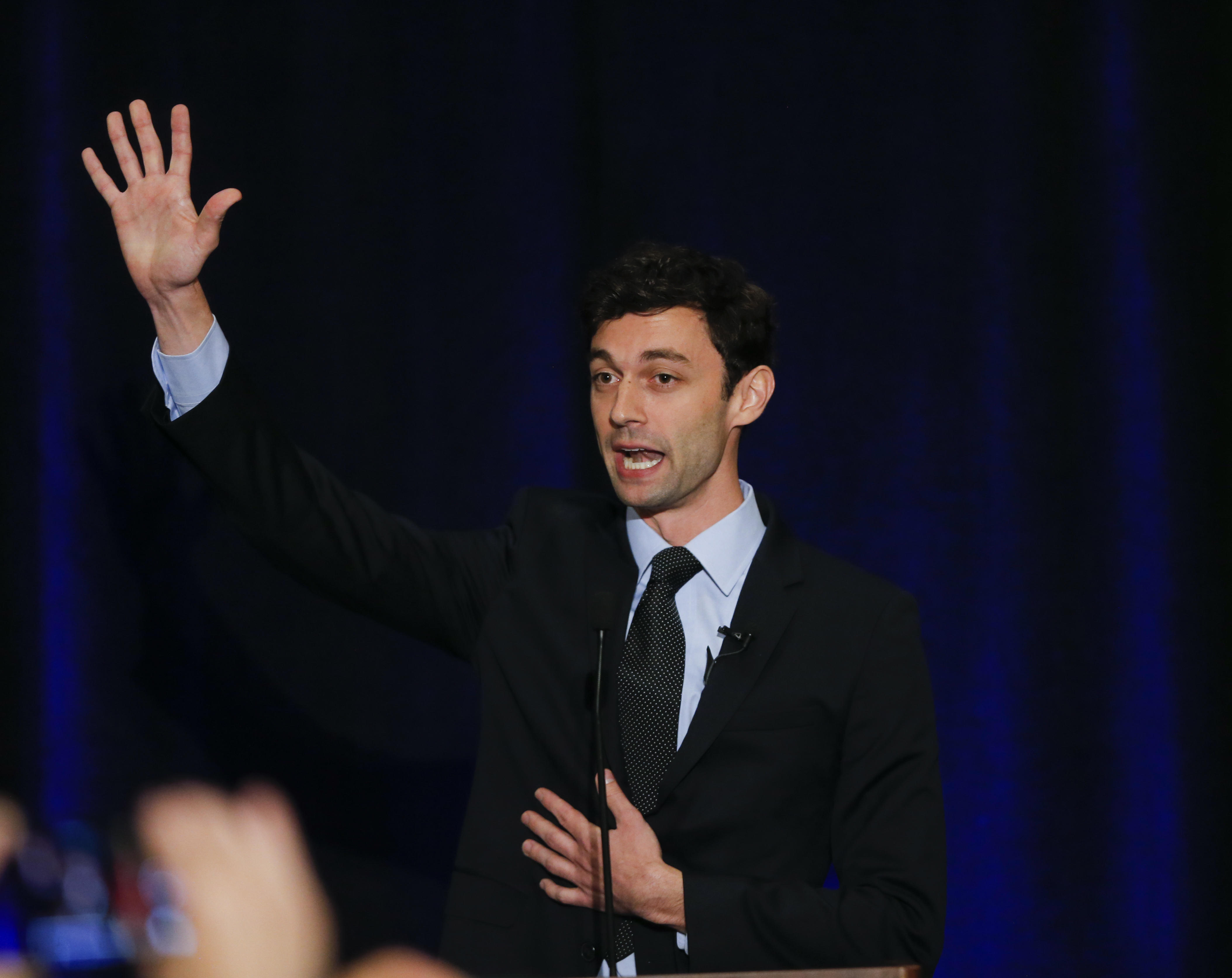 Democrat Jon Ossoff and Republican Karen Handel will meet in a runoff for a greater Atlanta congressional seat in a race with national implications.

Ossoff harnessed opposition to President Trump to lead an 18-candidate field in the typically conservative district, but he fell short of the majority needed to win outright.

Handel finished second as the top Republican vote-getter. She was Georgia’s first Republican secretary of state and has also run unsuccessfully to be Georgia’s U.S. senator and also to be its governor. She’s pitching herself as a common-sense conservative.

On Wednesday, President Trump called Handel -- she tweeted a thank you afterwards.

Earlier, he was taking credit for helping nudge the district toward the June runoff:

Democrats were hoping Ossoff would be able to garner the 50 percent necessary to avoid a runoff and capture the seat. The special election was a “jungle primary,” meaning the top two contenders – regardless of party – would face off if no one could capture a majority of the vote in the first round.

Ossoff, 30, ran as a pragmatic centrist in the district, which has been represented by a Republican since Newt Gingrich won it in 1978. In November, the district easily re-elected Rep. Tom Price, a staunch conservative, but only narrowly went for Mr. Trump. The seat then became vacant when Price was appointed Secretary of Health and Human Services by Mr. Trump earlier this year.

There were big differences between the early vote and the Election Day vote. Ossoff did well in that early vote and jumped out to an initial lead as those ballots were counted, perhaps reflecting the Democratic enthusiasm that marked his rise. But the Election Day vote was very heavily Republican, and it pushed Ossoff back under the 50 percent level.

CBS News etimates showed up to twenty-point gaps between the early and Election Day votes as the county reports came in  – perhaps reflecting a late surge in Republican interest in the race and what appears to have been strong, late turnout efforts from the GOP.

Overall, turnout was high for a Special Election and, with a few more precincts left to count early Wednesday, it appeared Ossoff would end up with about the same percent Hillary Clinton got in the district in November.

Given the partisan leanings of the district, Republican Handel is likely to be favored heading into the runoff.

Mr. Trump’s perceived weakness in the district, along with its changing demographics, convinced Democrats to pour millions of dollars into the race. Ossoff raked in an astonishing $8.3 million in the last few months, with most of it coming from donors giving less than $200. However, Republicans were quick to point out that the vast majority of that cash came from out of state.

Republicans countered with millions in outside group spending in an effort to damage Ossoff and keep him below 50 percent. For his part, Mr. Trump recorded a robocall encouraging voters to support the Republican candidates, and tweeted about the race several times. The crowded primary featured 11 Republican candidates splitting the conservative vote. That didn’t prove to be enough to put Ossoff over the top, and Republicans can now be expected to coalesce their support around Handel.

Nonetheless, Ossoff issued a statement early Wednesday saying, ““This is already a remarkable victory. We defied the odds, shattered expectations, and now are ready to fight on and win in June.  They said it couldn’t be done. And when they realized we were ahead, they threw millions of dollars against us. But no amount of dark super-PAC money can overcome real grassroots energy.”

Republican National Committee Chairwoman Ronna Romney McDaniel said in a statement that, “Georgia voters made it clear they want to keep conservative values in the 6th District. ... These liberal Democrats failed to inspire voters with a candidate who ... received 97 percent of his donations from outside the district, and consistently lied about his own weak resume.”

Mr. Trump tweeted early Tuesday urging Republicans in the district to get to the polls:

The district, although still Republican-leaning, has been trending more Democratic in recent years, and provides Democrats with their best shot this year of picking up one of the 24 seats they’ll need to reclaim the House. Mitt Romney carried the district by 23 points in 2012, a margin that shrank to less than 2 points when Mr. Trump won it in November.

The district is one of the best educated in the country, with 58 percent of residents having a bachelor’s degree or higher. That’s seen as a warning sign for Republicans, as Mr. Trump struggled to win college-educated whites in the last election. Since the 1990s, the district has also seen its share of white residents decline from 90 percent to 70 percent, in large part due to an influx of Hispanics and Asian-Americans.

Ossoff, a former Capitol Hill staffer who lives just outside the district, now has one last shot to use these factors to his advantage. But it will be an uphill climb, as Republicans still outnumber Democrats in the district and the GOP finally has a single candidate the party can rally behind.