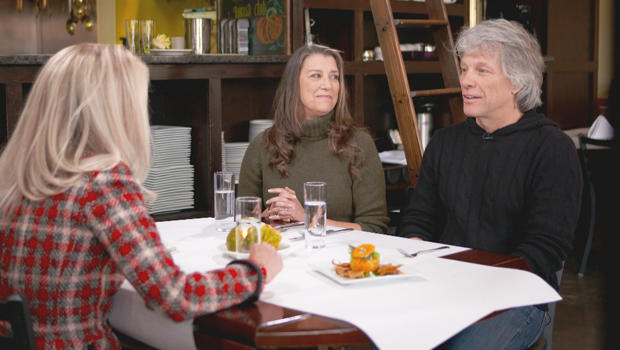 Rocker Jon Bon Jovi has made a career out of filling stadiums with cheering fans, and now he's using that appeal – and his own financial resources – to help feed the homeless and needy through his JBJ Soul Kitchen restaurants. He tells correspondent Tracy Smith he gets a sense of fulfillment from the work, in an interview for the "Eat, Drink & Be Merry" edition of "CBS Sunday Morning," to be broadcast Sunday, November 24.

Bon Jovi and his wife created the first JBJ Soul Kitchen in 2011 in Red Bank, New Jersey, as a way to provide quality meals to anyone in need in the community. Diners are asked to pay a suggested donation that covers their meal and someone else's meal, too. If they can't pay, they're asked to volunteer. Most of the labor is donated, as is nearly all of the food.

"Hunger doesn't look like what your mind's eye might imagine," Bon Jovi's wife, Dorothea Hurley, tells Smith. "It's the people at your church. It's the kids that go to school with your kids. And I think that was eye-opening for a lot of the community here that said, 'Oh, there's no homeless people here.'"

Hurley and Bon Jovi have since expanded to a second location in Toms River, N.J.  A third will open on the campus of Rutgers University, where the couple hope to feed students struggling to pay for food. "We all think it's a rite of passage," said Bon Jovi: "To study hard and eat ramen noodles. How about if it's the only thing you can afford?"

How does helping feed people compare to facing a stadium of screaming fans?

"It can obviously never compare to performing or writing songs," said Bon Jovi. "But what it does do is it gives you the same sense of fulfillment, I think, when I leave here at night and you see the lives you touch. I have left here, you know, after a long night of volunteering and said, 'That makes you feel the same kind of good.' You know? And that's what I say, the way to feel good is to do good, you know?

So no student eats alone