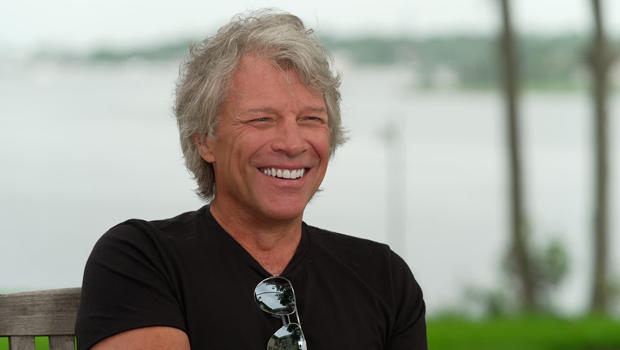 When Jon Bon Jovi was in Nashville putting the finishing touches on the band's 15th studio album, it was a different age – and by that we mean only a year ago. Back then, he and the band were looking to the future. In fact, they optimistically titled their upcoming album "2020."

But then of course 2020, the year, became what it became. Bon Jovi put the album on hold, and cancelled a sold-out summer tour which was to have a big two-night finale at Madison Square Garden in New York City.

Walking through the empty arena with correspondent Lee Cowan, Bon Jovi said, "Nobody's ever seen it like this, with nobody here. The silence is deafening."

"And you don't know when you'll be back?" Cowan asked.

"No, not for quite some time."

What the Rock and Roll Hall of Famer saw during the pandemic was what we all saw: people needed help. And he put his back into doing just that. "See that smashed-in finger? That was from one of the cases that I dropped on my finger!" he laughed. "I wasn't made for manual labor!"

He's been applauded for feeding the hungry out of his JBJ Soul Kitchen restaurants in New Jersey, but he knew the restaurants alone weren't enough during COVID. So he, along with his wife of 31 years, Dorothea, opened up a food bank, too, on the eastern tip of Long Island.

Cowan said, "I imagine most of those people are people that had never been to a food bank before."

"Correct. These are the folks that are watching the show right now, and had never even considered going to a pantry."

At his home in New Jersey, along the banks of the Navesink River, Bon Jovi has his own studio, and it was where during the pandemic he'd come to play and keep his voice in shape. "I think when you're younger you're a little more bullet-proof," he said. "You know, you just sorta gargle with tacks and nails and you go and you do it again!"

He began writing, too, about everything that was going on around him – his own state of the union, if you will.

Tonight they're shutting down the borders
And they boarded up the schools
Small towns are rolling up their sidewalks
One last paycheck coming through
I know you're feeling kind of nervous
We're all a little bit confused
Nothing's the same, this ain't a game
We gotta make it through

When the rest of the band joined in, his "Do What You Can" had the sound of a pandemic anthem to frontline workers everywhere. He turned it into a duet with Jennifer Nettles that gave it a new sound, and a new video, featuring Bon Jovi walking through the empty streets of New York.

Bon Jovi said, "How can you not feel when you see the news and see what's going on?"

"You've written and co-written so many songs over the decades, but nothing against this kind of backdrop," said Cowan.

"No, no. And if you're a writer, this is fertile ground. I mean, it's almost put me in this position emotionally right now that I don't know why I would ever wanna rewrite 'You Give Love a Bad Name,' you know?" he laughed. "And now I'm just going, 'This is all I need to be writing.' Moments in history, moments in my history, moments in time."

As the nation turned its attention to race, so did he. A few scraps of paper turned into another new song, "American Reckoning":

America's on fire
There's protests in the street
Her conscience has been looted
And her soul is under siege
Another mother's crying, as history repeats
I can't breathe

Words matter, and he knew it.  "If I'm not the poster-boy for what could be described as White privilege, then who is?" Bon Jovi said. "I'm an older, White, affluent celebrity, you know? I got it.  So, I had to be very careful, and I ran it by friends and people I didn't know, who could opine."

"And did they?" Cowan asked.

"You're very careful to say it's not a political record."

"Because I'm not taking sides," Bon Jovi said. "I don't care about your politics. I care about you just realizing that in a world in which we live, we're breathing the same air."

Being socially conscious isn't exactly new; Bon Jovi's debut single back in 1984, "Runaway," was about struggling teenagers that he'd seen every day. "When I'd go to the city I'd get off the bus.  And it wasn't a pretty sight, you know, around the Greyhound station in 1980. Kids were working' the tunnel you know, walking' the streets."

It was that song that got the band to Madison Square Garden in the first place. They were opening back then for ZZ Top. Now, you'd think he'd remember that night fondly. He doesn't – former bandmate Richie Sambora's guitar stopped working, and the crowd heard nothing but silence. "And then they start going, 'ZZ Top! ZZ Top! ZZ Top!' And we're sitting there, and I take off my guitar, and I toss it to him. I said, 'Play mine, and I'm just gonna sing.' And we played a 30-minute set in 17 minutes! We were like the Ramones!"

They went on, of course, to sell more than 130 million albums (more than ZZ Top, by the way).

"Livin' On a Prayer," to this day, is practically an American standard.  "You know, that song will be mentioned in my obituary someday: 'The co-writer of 'Livin' On a Prayer' is dead tonight,'" he laughed.

Cowan asked, "Did you know it at the time?"

The band filled not only arenas, but stadiums on a routine basis, and still can.

Does he miss it? "I've always been the reluctant rock star, to be honest, because I would always leave my nail marks in the driveway no matter what tour it was. And it took me a while to adjust to life on the road. And then I was like, 'Fine, I love it here.' And I did."

You can tell he did. He'd do just about anything to be up-close-and-personal with his fans. "Yes, I can walk across the tops of those seats like a circus performer!" he said.

And he showed Cowan how he does it.

At 58 Jon Bon Jovi has matured just the way his fans want him to: not too much, just enough. From big hair to grey hair, he has rarely missed a beat.

"There's no greater joy in my life than writing a song and thinking that that is the closest thing to immortality anyone can ever realize," he said. "It's something that'll live well beyond your time here. So, that gives me the greatest joy."

You can stream Bon Jovi's album "2020" by clicking on the embed below (Free Spotify registration required to hear the tracks in full):