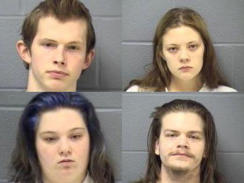 (CBS) JOLIET, Ill. - Joshua Miner, one of the four suspects charged with killing two 22-year-old men in Joliet, Ill. on Jan. 10, allegedly admitted that he had sex with his girlfriend, Alisa Massaro, on top of the corpses, The Joliet Patch, citing police documents, reports.

The 24-year-old Miner reportedly told investigators that 18-year-old Massaro once told him that she fantasized about having sex with a dead person.

So, according to the police reports, that's how Miner got the disturbing idea to engage in sex on top of the two men they had just allegedly killed.

The Patch reports Massaro initially resisted the request. However, they then placed something -perhaps a sheet or a blanket - on top of the bodies and had sex.

Massaro and Miner, along with Adam Landerman, 19, and Bethany McKee, 18, are accused of luring Terrance Rankins and Eric Glover to Massaro's home, then robbing and killing both victims, CBS Chicago reports. The suspects also allegedly tried to dismember Rankins' and Glover's bodies and then continued to party together, according to the station.

CBS Chicago reported shortly after the horrific incident that the suspects and victims appeared to be friends.

Joliet Police chief Michael Trafton said the four suspects were not tested for drugs or alcohol when they were arrested, according to the station.

Suspect Landerman is reportedly the son of a Joliet police sergeant.

County records show Massaro has a restraining order against Miner, who has an extensive criminal record - including a pending child pornography charge, according to the station.

"This is one of the most brutal, heinous and upsetting things I've ever seen in my 27 years of law enforcement," Trafton said at the time. "Not only the crime scene, but the disregard for common decency toward human beings."

Police were notified about two dead bodies at the house, and officers noticed movement inside the house so they went in, Trafton said.

He said Landerman, Massaro and Miner were playing video games and were "very much surprised" when the police arrived. McKee had left before police arrived but was picked up by authorities in Kankakee, Ill. shortly after, police said.