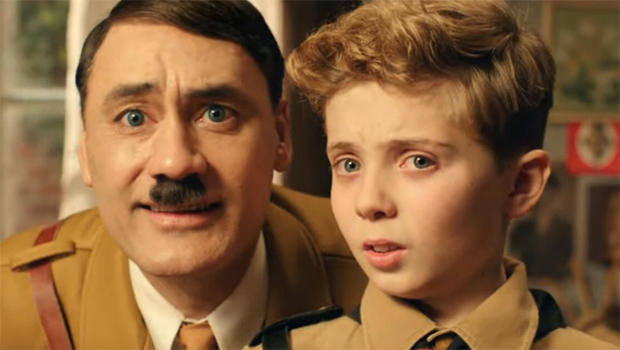 Before he hit the big time, New Zealand filmmaker Taika Waititi was living in Hollywood couch surfing. But then, in 2017 Waititi directed "Thor: Ragnarok," a blockbuster that made $800 million. With that kind of success, Waititi's next movie could be whatever he wanted … and he wanted something different.

Correspondent Tracy Smith asked, "Why did you decide to take the story of a young woman hiding from the Nazis and put slapstick comedy into it?"

So, Waititi wrote and directed "Jojo Rabbit," the story of Jojo, a 10-year-old boy in the Hitler Youth, and Elsa, a young Jewish girl hiding in his attic. And yes, it's a comedy.

"There's a little Chaplin there," Smith said of Waititi's walk.

"This is how I walk. This is my normal walk!" he laughed.

Waititi does seem a bit like Charlie Chaplin, another writer-director who poked fun at the very unfunny subject of Nazi Germany, in his 1940 comedy, "The Great Dictator."

And like Chaplin, in "Jojo Rabbit" Waititi plays Hitler himself.

Smith asked, "You wove this comedy into this serious story for a reason."

"Comedy for me is a really important tool," Waititi said. "It really irks me that it gets overlooked so often as a meaningful form of art because throughout history comedy has been, I think, the strongest weapon in commenting on society and issues. And dictators, kings and royalty, they hate being made fun of. You know, when people make jokes about them, it drives them bananas."

Adolf is young Jojo's imaginary friend. And he's a 10-year-old's vision of the Fuhrer, an awkward, socially-inept Hitler.

The 44-year-old Waititi, who hails from New Zealand, is a self-described Polynesian Jew. "You're not exactly the obvious choice to play Adolf Hitler," said Smith.

"No, no. There are definitely whiter people who could've done it!" he said.

Scarlett Johansson, who plays Jojo's mother, Rosie, said, "I think the first time that I saw Taika in his Hitler costume it was, you know, jarring."

She came to the project by way of Thor himself, Chris Hemsworth, Johansson's co-star in the "Avengers" movies. "Chris asked me if I had read his script for 'Jojo Rabbit.' And he was just saying it was one of the best scripts he's ever read."

"I'm right here," Waititi reminded her.  "Awkwardly. As if I'm not listening at all."

Like Waititi himself, the script was big on laughs, but also had heart. "I just fell in love with the character of Rosie so much," Johansson said. "It's very rare to feel that way when you're reading something that, you know, you fall in love with a character like that just off the page."

Smith asked Johansson, "You have ancestors who died in the Holocaust. Did you have any reservations about doing a comedy about Nazis?"

"I never thought about that, the film, as such," she replied. "I think it's really a very triumphant story. And such a Valentine for single moms and independent women."

Still, not everyone is comfortable with the film.

Smith asked, "What do you say to people who just flat-out say, 'What's so funny about Nazi Germany?'"

"I say, 'Have you looked at the uniforms, if you observed how ridiculous they were?'" Waititi said. "Sure, they have a lot of power. And they were brutal and calculating and responsible for millions of deaths. But one way of taking power away from those people is to laugh at them, and to make a mockery of them."

"This is what satire is."

"Yeah. I'd be worried if no one criticized my movie," he said.  "If everyone liked it, then I'd know I've made a terrible, safe, mediocre film."

There are some surprises in "Jojo Rabbit" we won't spoil for you – and poignant moments you won't see coming. There was also a big surprise Waititi got from one of his comedy heroes at the AFI Awards: Mel Brooks, who directed his own Hitler comedy, "The Producers": "Mel Brooks loved the film," he said. "And that was a big thing for me. And told us the film's important and everyone needs to see it.

"And I said, 'If this whole award season thing goes down the drain, this is our Oscar, the fact that this guy said this for us,' because it's a big thing to get recognized by one of the greats, and recognized for what we're trying to do."

And the film received some more recognition, from another unexpected source: The Shoah Foundation, in conjunction with USC, is teaching the film. "Yeah, they're using it as part of their education tools now. It's sort of amazing!" Waiti said. "It feels like the story and the film is bigger than us now."

Before "Jojo" and "Thor," Waititi had smaller success with films like "Hunt for the Wilderpeople" and the vampire roommate mockumentary, "What We Do in the Shadows." Surprisingly, he only began to make films in his 30s: "I did a short film called 'Two Cars, One Night.' And that kinda changed everything, 'cause it got nominated for an Oscar in 2005."

And now, he's up for more. It's an honor, for sure, but of course Taika Waititi will play it for laughs.

"I'm not gonna win anything – stupid awards!" he said.

"You don't think you're gonna win anything?" asked Smith.

"Awards are worthless. Nobody wants any of the awards. I say, you know, you hear all around town:  awards are so dumb. They're not even important!"

He finished with the perfectly logical statement: "Only losers get awards!"

To watch a trailer of "Jojo Rabbit" click on the video player below: