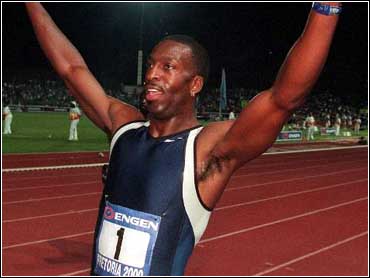 Competing at the Engen Grand Prix, Johnson was timed in 30.85 seconds, breaking the mark of 31.48 set by Danny Everett of the United States and Roberto Hernandez of Cuba on Sept. 3, 1990, at Jerez de la Frontera, Spain.

This was Johnson's second race in a three-city tour of South Africa, and his second outstanding performance. Last Saturday at Pietersburg, he made his 2000 debut by running the fourth-fastest 200 with 19.71.

The conditions Friday were ideal for Johnson, the 1996 Olympic gold medalist and world record-holder in the 200 and 400.

"I'm quite surprised at my form right now," he said. "I got out of the blocks real good. I held back a little in the second 50 meters and over the last 200, I went all out. Although this is not an Olympic distance, I'm still proud that I've broken another world record."

Johnson will race the 400 at Cape Town next Friday night.

Asked whether he was peaking too early in the season, Johnson said: "I don't belive in peaking. I believe in getting in good shape."

The meet also featured an impressive throw by Czech javelin world record-holder Jan Zelezny. His throw of 297 feet, 2 inches his best since 1998 still was far short of his world record 323-1.

"I had shoulder surgery in 1998 from a collarbone break and no one expected me to come back from that," Zelezny said. "This has been a great boost. My technique was not ideal. There was too much tension. But now that I've thrown over 90 meters (295-3), I'm confident of winning the gold medal in Sydney."

Planes carrying more than 300 Americans arrived at military bases with some of the evacuees already having tested positive for the new cononavirus.