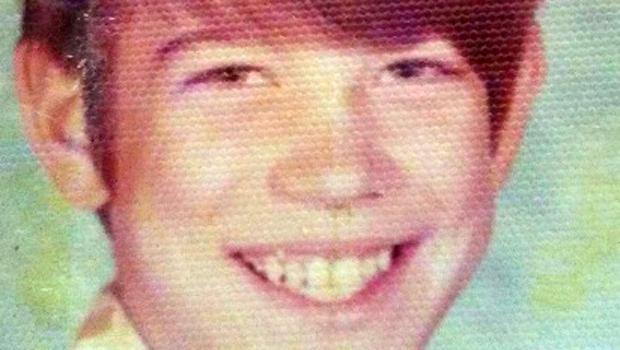 Gacy was convicted of luring 33 young men and boys to his Chicago home, then strangling them and burying them on his property. The murders took place between 1972 and 1978.

"It's not every day you heard this: A monster murdered your brother," said James' sister Lorie Sisterman. "It's just not an everyday, normal conversation that you have with a detective from a different state that tells you this awful news."

Sisterman's DNA helped identify her brother's remains. The DNA was submitted after someone in the family wondered if James had been a Gacy victim.

Sisterman, the oldest sibling, said the father of the family drank and wasn't always around. Her brother was a troubled youth and ran away to Chicago at the age of 16.

She remembered a conversation with another sibling around that time:

"And he said something like, 'Jimmie's wearing makeup.' And I'm like, 'What?' So starting to dabble, maybe, in the gay lifestyle. But all of us not understanding it."

Jimmie Haakenson called his mother from Chicago on Aug. 5, 1976.

This week, a Cook County sheriff's detective went to Minnesota to tell the family the news.

"We talked, and then he says, 'I regret to inform you that, yes,'" Sisterman said. "A couple of people bursted out crying, and all I could say was, 'Wow.'"

Does she feel any sense of closure?

Sisterman, who described herself as in a fog, replied: "I don't know what that feels like."

There are still six unidentified victims killed by Gacy, who was executed in 1994. It had been five years since his last victim was identified.