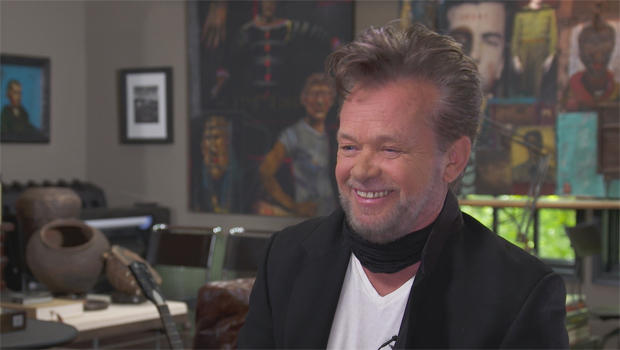 "Hurts So Good" was a hit summer song back in 1982 for John Mellencamp. Decades later, he's still a singer with stories to tell ... and a lot of drive besides, as Jane Pauley found out firsthand (This story was originally broadcast on July 2, 2017):

John Mellencamp was born in a small town – Seymour, Indiana – and he still lives outside another small town about 50 miles away, where last year it crossed fellow Hoosier Jane Pauley's mind she could die in one.

"I am not letting go!" she laughed, holding onto Mellencamp as they took off on a motorcycle. (Yes, she should have worn a helmet.)

Mellencamp has come a long way, to his 86-acre estate bordering Lake Monroe near Bloomington.

Pauley asked, "What is it about you and Indiana?"

"I have to come here; I just feel at home," he said. "I mean, I can be away for a long time and come back here and kind of decompress and then: boom!"

It's ironic: he extols the bucolic life, but lives a fast one.

"Where would you rather be than sitting here and being interviewed?" Pauley asked.

"Well, cards on the table? I don't really like being interviewed. I have talked about myself for 40 years. And I'm just not that interesting."

Not interesting? Married in high school and a father at 19, Mellencamp wasted no time. At 21, he went to New York to study art – or to sign a record deal.

"It turned out that the New York Art Student League wanted money, but the record company wanted to give me money!" he laughed. "I ended up getting a record deal like that."

"I interviewed the head of a record company and he said within minutes, everybody knows that somebody who has walked in the door has something."

"With the most humility, I say that's what happened to me. They didn't even listen to the demo tape!"

But we're still listening to Mellencamp classics, like a little ditty about "Jack & Diane":

Oh, yeah, Life goes on
Long after the thrill of living is gone.

"I love every part of that statement. What do you think is driving you?" Pauley asked.

He's a serious and prolific painter. His portraits have been shown at museums. But the music often interrupts the brushwork.

"There's a song on the new record called 'Easy Targets,'" he said. "And I wrote that song in, I don't know, in five minutes. I couldn't even keep up with it. So, songwriting has become like a real surprise to me and really exciting at my age. It's more exciting now than it ever was."

To watch the music video of John Mellencamp's "Grandview" (featuring Martina McBride), from his new album, "Sad Clowns & Hillbillies," click on the video player below.

The critics took notice. Pauley asked, "Do you read 'em?"

"Nope. I'm finding this out from you!"

His music has changed over the years… and so has his name. From the 1970s through the '80s, he was John Cougar. His first manager thought it would sell more records.

To hear "John Cougar" perform "Hurts So Good" click on the video player below:

For a while he went by John Cougar Mellencamp.

To hear "John Cougar Mellencamp" perform "Rain on the Scarecrow" click on the video player below:

At times overtly political, Mellencamp songs about freedom, struggling farmers, and the working man led fans to make assumptions. "Quite honestly, that's one of my biggest disappointments," he said. "You would think with all the goddamn people in the world, that somebody would have taken the time to sat down and listen to my lyrics to my songs one time."

"Pink Houses," for instance, is not a red-white-and-blue anthem:

"There's winners and there's losers
But they ain't no big deal
'Cause the simple man, baby
Pays for thrills, the bills, the pills that kill

"Your fans are probably way, way, way on the spectrum to the right of you," said Pauley.

"Oh, I've been booed," Mellencamp said. "When the Iraq War started, I was so against that."

If John Mellencamp sounds like one self-assured son-of-a-gun, she is the reason why: "Here's the trick, if you want a kid that has confidence: my grandmother told me every day of my life, 'Buddy, don't forget: you're the handsomest, luckiest, talented boy in the world.' The flip side of that is, it's really hard for girlfriends to compete with that!" he laughed.

It's an acknowledged fact that relationships have been a struggle.

Pauley asked. "What is the greatest lesson you've learned from the women in your life?"

"Too many to name. Apparently, women just don't like me very much. That's all I can say about that."

He's been linked in recent years to perennial cover girl Christie Brinkley and actress Meg Ryan – and before them, three wives. He has five children, and nine grandkids.

As he looked for another cigarette, Pauley noted, "You have a voice to protect. Don't you? Or is it just getting better and better?"

"I mean, that's what I wanted. I wanted to sound like, you know, Louis Armstrong. But I didn't. I sounded like a white guy. And now I got it. These are my babies, c'mon!"

He says he doesn't worry so much about cigarettes and his health. He's got a strange theory: "Rightfully or wrongfully, I believe that it's the combination of cigarettes and alcohol that get people -- the two of them combined."

And he hasn't had a drink, he says, since college.

"It's probably a wacky idea, but it comforts me!" Mellencamp said. "Now that I've said that, two weeks from now you're gonna read: 'Mellencamp dies of heart attack'!"

"I can see the finish line from here. I only have so many summers left. And I intend not to waste them being old."