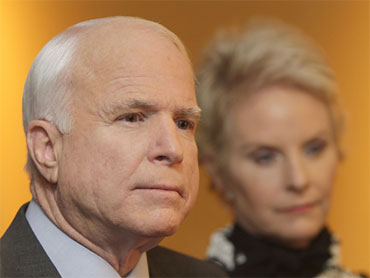 In a Sunday appearance on NBC's "Meet the Press," Sen. John McCain (R-Ariz.) urged for further studies before repealing the military policy "Don't Ask, Don't Tell," arguing that "we need a thorough and complete study of the effects - not how to implement a repeal, but the effects on morale and battle effectiveness."

The Pentagon is set to produce such a study on December 1 of this year - and the Washington Post reports that two sources familiar with it said "the survey found a majority of respondents ... said the effect of lifting the gay ban would be positive, mixed or nonexistent."

McCain said he thinks the report should be subject to further scrutiny, however, and that the Senate should not lift the ban on allowing gays to serve openly in the military during Congress's lame duck session, which kicked off this week.

Despite his current resistance to reversing the controversial policy, the former presidential candidate has in previous years shown a willingness to eliminate it: In 2006, he told students at Iowa State University that he would support repeal if military leadership said they supported doing so.

McCain appears to face opposition on the matter even within his own family: In September, daughter Meghan McCain posted a series of comments on her Twitter account clarifying her position on "Don't Ask, Don't Tell," which she opposes.

"I am a supporter of LGBT rights and am against DADT - I fight every day. Until you are the daughter of a republican senator - don't assume what I do and the stances I take are ever easy. I love my family and I love the gay community. There's a lot of anger being projected at me personally for my father's stance on DADT. I love my father very much and we disagree. Project your anger at politicians and the president you elected, because last time I checked - Obama isn't exactly advocating for LGBT rights or removing DADT," McCain said.

And in a recent anti-bullying ad produced by the gay advocacy group NO H8, his wife Cindy appeared to slam "Don't Ask, Don't Tell" when she lamented the fact that LGBT youth " can't serve our country openly," and that "our government treats the LGBT community like second class citizens."

But Cindy McCain later backtracked partially on the issue, tweeting "I fully support the NOH8 campaign and all it stands for and am proud to be a part of it. But I stand by my husband's stance on DADT."

Aubrey Sarvis, executive director of the Servicemembers Legal Defense Network, blasted McCain's comments to the Washington Post. "McCain is telling the Pentagon: Keep working until you produce the outcome I'm looking for," she said.

McCain's plea to hold off on repealing "Don't Ask, Don't Tell" comes amid reports that conservative leaders are calling for Republican lawmakers to leave social issues off of the political agenda in order to make shrinking the government their primary congressional goal.

"On behalf of limited-government conservatives everywhere, we write to urge you and your colleagues in Washington to put forward a legislative agenda in the next Congress that reflects the principles of the Tea Party movement," wrote signatories of a letter to presumptive House Speaker John Boehner, among whom included members of the group GOProud, as well as leaders from the Tea Party Patriots and the New American Patriots. "This election was not a mandate for the Republican Party, nor was it a mandate to act on any social issue," they urged.