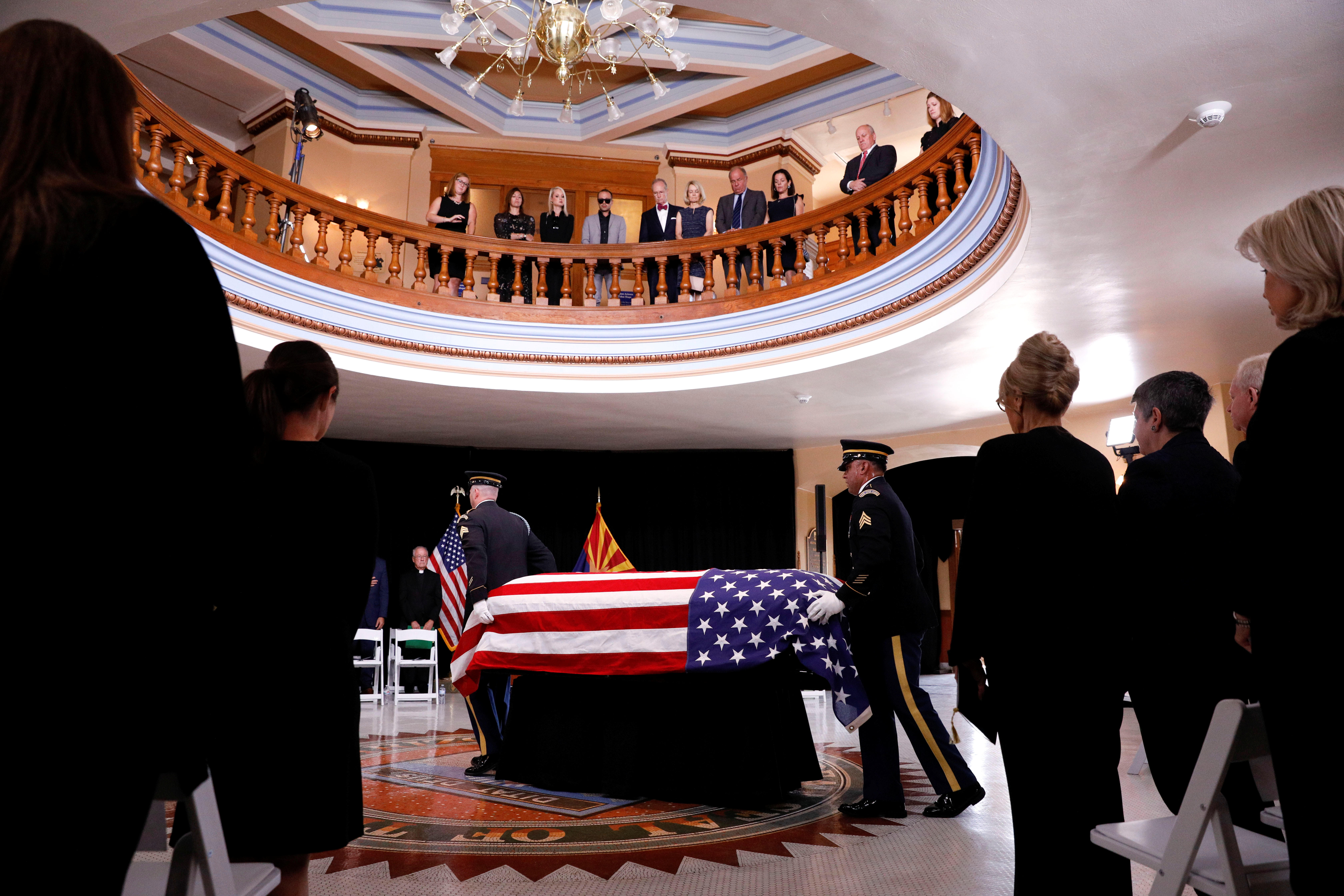 Starting a week of somber events honoring the life and legacy of Sen. John McCain, the body of the late senator is lying in state at the Arizona Capitol on Wednesday. McCain died at age 81 on Saturday after losing his battle with glioblastoma, an aggressive form of brain cancer.

A police escort processional carried McCain's body to the Capitol as scores of Arizona veterans, military, law enforcement, fire, and first responders lined the sides of the Capitol Plaza for his arrival.  McCain was greeted by Arizona Gov. Doug Ducey and first lady Angela Ducey. McCain's wife Cindy and her sons Jack and Jimmy, dressed in formal military attire, received McCain's body ahead of the formal ceremony.

In remarks at the official ceremony inside the Capitol rotunda, Former Senator Jon Kyl said that McCain "believed in America."

"He believed in its people, its values and its institutions," added Kyl. The McCain family friend said he believes that "America is stronger for his fierce defense of our values."

Governor Ducey said that McCain "brought us above politics" doing so with "humor and humanity and without compromising the principles he held so dear."

"This man was trusted and he was tested, quality in increasingly short supply," said Ducey. He added, "We sometimes think politics is life and death but John McCain knew better because he actually saw death and dying and tragedy. Make no mistake, he fought like hell for the causes he believed in."

Ducey said that as the nation continues to grieve, "John McCain's fight for America isn't over."

"It's a fight all Americans are obligated to continue on his behalf. As we march forward with courage and resolve he would have demanded, may we take comfort in knowing that in that fight, John McCain will always have our back," Ducey added.

At the close of the private ceremony, members of the McCain family approached the senator's coffin to deliver an emotional goodbye. Members of the public in Arizona will later be able to pay their respects.

McCain raised his family in the Phoenix area and at his beloved ranch in Sedona, spending the final months of his life there. Kyl reminded them that McCain "loved his adopted state" and its natural beauty. Ducey echoed McCain's love for the state, saying, "Imagining an Arizona without John McCain is like imagining an Arizona without the Grand Canyon. It's just not natural."

In the past 40 years, only two others have lied in state at the Arizona Capitol: Arizona State Senator Marilyn Jarrett in 2006 and Olympic gold medalist Jesse Owens in 1980.