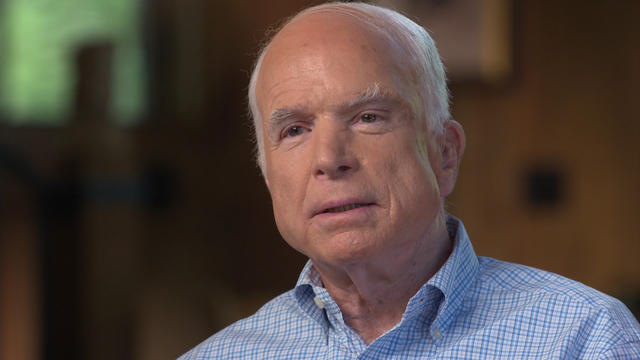 The Arizona Republican released a statement about the bill, proposed by Sens. Bill Cassidy, R-Louisiana and Lindsey Graham, R-South Carolina, which would repeal Obamacare's structure and replace it with block grants for states and it would roll back the 2010 health care law's Medicaid expansion.

"I would consider supporting legislation similar to that offered by my friends Senators Graham and Cassidy were it the product of extensive hearings, debate and amendment. But that has not been the case. Instead, the specter of September 30th budget reconciliation deadline has hung over this entire process," he said in a statement.

"I cannot in good conscience vote for the Graham-Cassidy proposal. I believe we could do better working together, Republicans and Democrats, and have not yet really tried. Nor could I support it without knowing how much it will cost, how it will effect insurance premiums, and how many people will be helped or hurt by it," he said. "Without a full CBO score, which won't be available by the end of the month, we won't have reliable answers to any of those questions."

Sen. Rand Paul, R-Kentucky, has also made it clear that he can't vote for the measure, describing it as "Obamacare lite." If one more Republican come out against it, it would kill the legislation. It seems likely Maine Sen. Susan Collins could be that "no" vote. "I'm leaning against the bill," she said at an event in Maine Friday, according to the the Portland Press Herald. "I'm just trying to do what I believe is the right thing for the people of Maine." Collins is concerned that Graham-Cassidy doesn't offer adequate protections for people with pre-existing conditions. "The premiums would be so high, they would be unaffordable," she said. Collins also opposed the previous repeal bill in July.

All Democrats are expected to oppose the bill, which means Republicans need most of their 52-member conference -- at least 50 votes -- to pass the bill. Vice President Mike Pence can break a tie if necessary.

McCain helped deliver the deciding blow to GOP leadership's last effort to repeal Obamacare at the end of July, shocking the political world with his thumb's down. McCain, who was diagnosed with an aggressive form of brain cancer over the summer, delivered a dramatic floor speech the day he returned to the Senate in which he urged members of his own party to return to "regular order" and to seek bipartisan solutions.

McCain had emphasized over the last few weeks that he wanted the Graham-Cassidy measure to go through the regular order that involves reviewing it and marking it up at the committee level.

Arizona's Republican governor, Doug Ducey, had endorsed the bill, and it was co-authored by Graham, one of McCain's closest friends in the Senate.

Republicans have been under pressure to rush the bill through because they only have until September 30th to use the budget reconciliation process, which allows certain legislation to pass with 51 votes rather than be subject to a 60-vote hurdle.