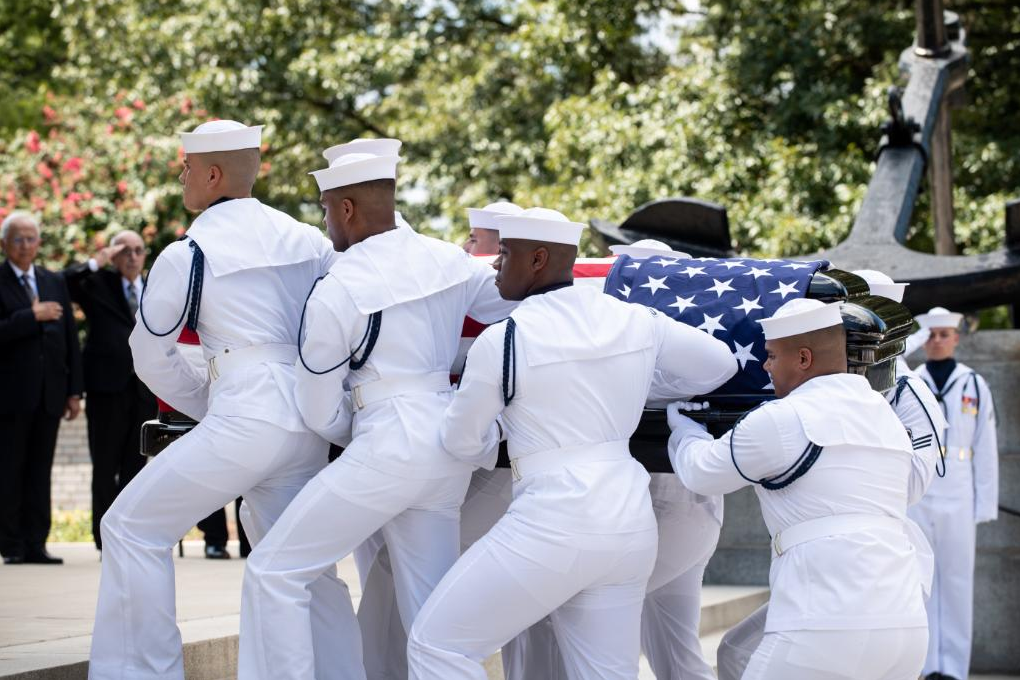 WASHINGTON — John McCain was laid to rest at the U.S. Naval Academy following a five-day series of memorial events that served as a final call to arms for a nation he warned could lose its civility and sense of shared purpose. The private ceremony in Annapolis, Maryland, was as carefully planned as the rest of McCain's farewell tour, which began in Arizona after he died Aug. 25 from brain cancer and stretched to Washington.

A motorcade with police processional carrying McCain's casket arrived at the Naval Academy just after 1:30 p.m. ET as hundreds of local mourners lined the streets saying their final goodbyes to the late senator. The private ceremony took place with close friends and family after 2 p.m.

Following his burial, a Missing Man Flyover Formation aerial salute took place just before 4 p.m. to honor McCain's memory. According to David McKinney of the U.S. Naval Academy, four F-18 pilots took part in the flyover with one on the right of the lead F-18 jet pulling off from the others to symbolize, and honor the departed.

McCain was then laid to rest in a plot next to his beloved friend and Naval Academy classmate, the late Adm. Chuck Larson. Larson had reserved four plots at the storied cemetery — two for McCain and himself, and two for their wives, now widows. Larson died in 2014, and McCain wrote in his recent memoir that he wanted to be buried next to his friend, "near where it began."

The U.S. Navy posted a few pictures from Sunday's burial, writing: "Today Senator John S. McCain III was laid to rest during a private ceremony at the U.S. Naval Academy. Fair winds and following seas Sir, we have the watch."

McCain's choice of burial location was as deliberate as the other details of his procession. He picked the historic site overlooking the Severn River over the grandeur of Arlington National Cemetery, where his father and grandfather, both admirals, are buried.

On Saturday, speeches by his daughter Meghan and two former presidents — Republican George W. Bush and Democrat Barack Obama — remembered McCain as a patriot who could bridge painful rivalries. But even as their remarks made clear their admiration for him, they represented a repudiation of President Trump's brand of tough-talking, divisive politics.

But it was Meghan McCain's emotional remarks that most bluntly rebuked Trump, who had mocked her father for getting captured in Vietnam. At the pulpit of the spectacular cathedral, with Trump's daughter Ivanka in the audience, McCain's daughter delivered a broadside against the uninvited president.

"The America of John McCain," she declared with a steely stare, "has no need to be made great again because America was always great." The audience of Washington's military, civilian and other leaders burst into applause.

McCain's family, including his 106-year-old mother, Roberta, escorted his remains to Annapolis on Sunday.

Mr. Trump was to remain in Washington. He spent Saturday tweeting and golfing in Virginia.