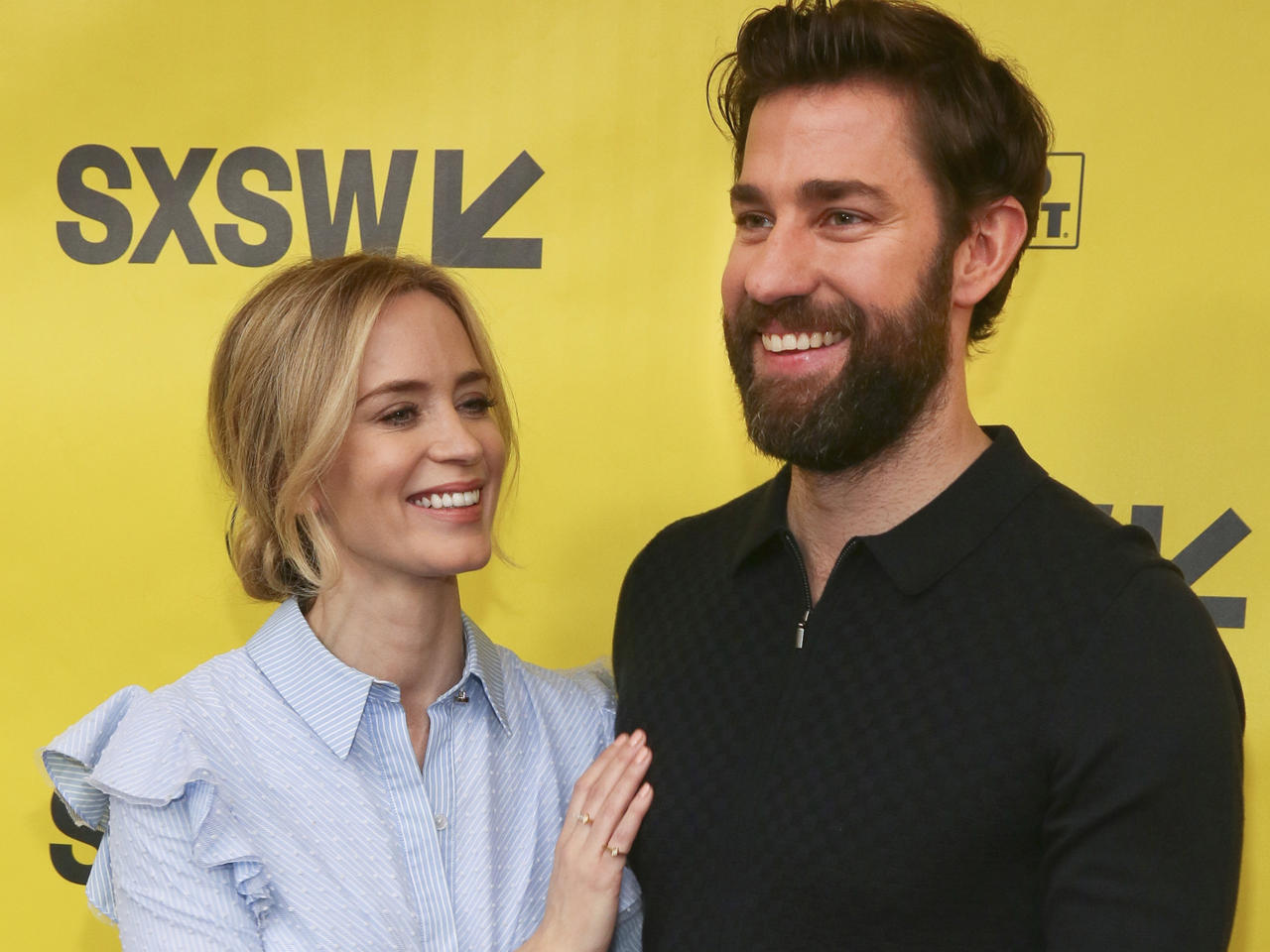 John Krasinski played it for laughs in the long-running TV series "The Office." Now, he and his wife, Emily Blunt, are co-stars in a movie that's all about harvesting horror in the countryside … which is where Anthony Mason has found them:

On a back road in Pawling, New York, actor and director John Krasinski found the perfect farmhouse for his first horror film: "We were looking, and I saw this house was on Zillow, and I thought, that's exactly the house I want.

"The family that you see in the movie -- that's where they used to live, but they no longer can because of the sounds of the house, and also a tree has fallen on it. And so they all decide to live in this barn, 'cause it has a dirt floor and they're able to remain quiet."

"A Quiet Place" is a post-apocalyptic story about a family trying to survive in a world of sonically-sensitive creatures that attack at the slightest sound.

Mason asked, Krasinski, "You're not a horror movie fan?"

"No, not at all. Scaredy cat, I think is the technical term," he laughed.

But in the script, the director -- a father of two -- saw a film about family: "The scares were secondary to how powerful this could be as an allegory or metaphor for parenthood. For me, this is all about parenthood."

That's also what attracted his co-star, Krasinski's wife, Emily Blunt: "I just fell in love with this mother. I just identified with her so much, just the fierceness of her."

It's the first time the couple had worked together.

Mason asked Krasinski, "Originally you weren't thinking your wife was going to do the part?"

"Don't want that either."

"Those both aren't good! So, I just chose the third option, which was not to talk to her about it at all."

But Blunt asked to read his script: "I'd previously suggested a friend of mine. And when I read his version, I was like, 'You need to call her and tell her that I want to do it,'" she laughed.

Was she nervous about it? "Yes!"

Mason asked, "Did you have discussions about it going in?"

"Oh God, yes. 'A Quiet Place' took over our lives for two years."

"For my deal?" she laughed. "We had so many people be like, 'You're gonna be divorced by the end.' And actually we were closer. It was kind of amazing."

They took over a local horse arena, building sets inside to shoot the film's interior scenes.

When we met last month, Krasinski was still in the editing room, mastering the sound for a film whose characters communicate mostly by sign language and hand signals.

For this movie, sound is everything. "It's a huge character, if not one of the main characters," Krasinski said.

Krasinski showed his wife a first cut: "And I'll never forget, she turned to me, put her hand on my knee and said, 'You just directed a silent film.'"

In "A Quiet Place," Blunt's character has to give birth without making a sound.

"I've never been so terrified to see somebody pregnant," Mason laughed.

It's a scene destined to become one of the film's iconic moments of suspense.

Blunt said, "John's very economical how he shoots, So he was like, 'I just need three takes.' Put me through the wringer, you know?"

Krasinski made his debut as a director on a few episodes of "The Office," the TV series he starred in for nine seasons playing paper salesman Jim Halperin at Dunder Mifflin:

"There was something about the fact that none of us had done anything huge; we were all in this tiny capsule, almost felt more like regional theater," he said.

Krasinski's character was known for his wry looks and romance with receptionist Pam. But a few years into the series, the Boston-born actor was introduced to Blunt at a restaurant: "I shook her hand, and -- no joke -- my head just went, 'Oh no…'" Krasinski said. "I knew it immediately."

She said, "It was just really easy. And he was so funny and sweet. We talked until five in the morning that night. And that was it!"

"Pick your Hallmark card: 'I felt like I had known her forever,'" he quipped.

The British actress, who had broken through in "The Devil Wears Prada," had just finished filming "Young Victoria." Krasinski recalled: "In the screening room, I'll never forget it, she was so good in the movie that this really went through my head: I thought, 'Man, who is she gonna date next? I mean, is it like Ryan Gosling? I mean, I can't keep this for much longer. This is nuts!'"

The couple made a video offering to double-date to the premiere of their new film to raise money for the Malala Fund:

Mason said, "You both kind of have big years this year."

"I thought you said 'big ears' for a second!" she laughed. "We do have big years. It is a big year for the Krasinski-Bluntsm, I guess. Wild."

This summer, Krasinski will bring back Tom Clancy's character Jack Ryan in the new series for Amazon. "It's a great part," he said. "Jack Ryan's our American James Bond. Less sex! That's all it is."

And in December, Blunt will resurrect an iconic children's character in "Mary Poppins Returns," which she had to explain to her four-year-old daughter, Hazel:

"I said how Mommy was pretending to be Mary Poppins. 'Cause that's kind of how I explain what we do for a living. I said, 'There was another lady who played Mary Poppins, and if she wanted to see that film …' And she was like, 'Yeah.' And now she's obsessed, and will probably reject my version of Mary Poppins!"

"You ready for that?" Mason asked.

"Not really. It'll probably break my heart. But Julie Andrews is Mary Poppins to Hazel."

Last month, Krasinski and Blunt walked the red carpet at the South by Southwest Film Festival in Austin, where "A Quiet Place" premiered to rave reviews.

Krasinski said, "The night before, Emily said, 'What do you want out of this experience?'"

"She really asked you that question?"

"She did; she could see I was nervous. And I said, 'You know, at the end of the movie, if they cheer, that'd be cool.'

"And so we go to the end of the movie and people actually jumped out of their seats and stood up and screamed, and my wife just screamed at me, 'Oh, my God!'"

"It doesn't get any better than that," Mason said.

"It does not get any better. No, truly, I said to the crowd, 'I don't think I'll have a better experience in my career. I'll never get to relive this moment. And that's okay.'"