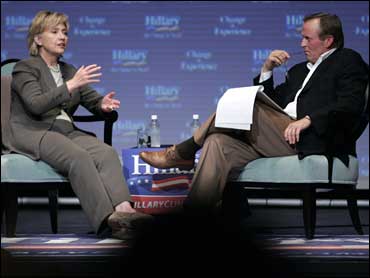 Democrat Hillary Clinton said on Sunday her campaign will not concede traditional Republican strongholds like Virginia in her presidential campaign, and President Bush's ebbing popularity gives Democrats more reason than ever to feel that way.

During a fundraiser with author John Grisham, Clinton said Mr. Bush's promise last week to veto a bipartisan health insurance program for children of low income and working class families is part of "a dangerous experiment in extremism" by the White House that will help Democrats.

"If the president wants to veto it, there could not be a clearer example in the difference in values" between Mr. Bush and the mainstream of the country, she said.

She attacked Mr. Bush's threatened veto after unveiling her own $110 billion-a-year universal health coverage plan last week. It would compel businesses to provide insurance for employees and boost taxes on the wealthy to pay for it. She and her husband were excoriated for their failed universal health care proposal in 1994, the year Republicans won control of Congress that would last for 12 years.

Opponents of her latest plan have called it a first step toward socialized medicine.

"What I proposed this week is very different from what I proposed in 1993 and '94. I learned a lot of lessons back then and I'm going to put them to work when I'm president," she said. "All the problems we were talking about in '93 and '94 have only gotten worse."

Her nearly 90-minute appearance before about 1,000 donors at a restored Charlottesville movie palace represented an endorsement by the best-selling author of legal thrillers, a former Democratic state legislator in Mississippi before his literary career blossomed in the early 1990s. Grisham now lives near Charlottesville.

Clinton took shots at Mr. Bush not only for his policies but his style, which she said has "alienated our friends and emboldened our enemies." If elected, she said, she would dispatch respected figures from both parties to capitals all over the world before she takes office with a simple message: "The era of cowboy diplomacy is over."

Republican National Committee spokeswoman Amber Wilkerson sought to link Clinton to the liberal anti-war organization that ran a full-page ad in the New York Times attacked the top U.S. general in Iraq, David Petraeus, and made sport of his name: "General Petraeus or General Betray Us?"

"Hillary Clinton and her friends at MoveOn.org are the ones emboldening our enemies by attempting to force an arbitrary timeline for withdrawal from Iraq and choke off funding for our America's troops," Wilkerson said.

Clinton said that voter fatigue with the White House is so strong even in Virginia, a state that has supported a Democrat for president only once in the past 55 years, her party could be in play next year. Democrats Mark R. Warner and Timothy M. Kaine won the past two governors' elections and Jim Webb upset Republican Sen. George Allen in last year's U.S. Senate race.

"I think what Jim Webb did, what Tim Kaine did, what Mark Warner did is very exciting because I don't think the people of Virginia are satisfied with the direction of the country," Clinton said.

Warner will be on the statewide ticket next year running for the Senate seat retiring Republican John W. Warner will vacate.

It marks the second time since July that the New York Senator has campaigned in Virginia. In July, she addressed a statewide gathering of county elected officials in Richmond.