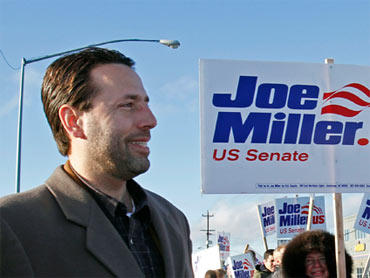 Alaska's bitterly contested Senate election went to state court Monday when Republican Joe Miller sued the state over the way write-in ballots for his GOP rival have been counted.

Miller is trying to stop the state from using discretion in determining voter intent on write-in ballots cast for Sen. Lisa Murkowski.

The Associated Press last week called the race for Murkowski, who had a 10,328-vote lead over Miller. Her total includes 8,159 ballots contested by Miller observers. Excluding those, she had a 2,169-vote lead.

Murkowski mounted the write-in campaign after losing to Miller in the GOP primary.

Miller's lawsuit was originally filed in federal court, but U.S. District Judge Ralph Beistline ruled Friday it was a matter for a state court to decide.

But Beistline said Miller's challenge raises "serious" legal issues. The judge granted a temporary injunction halting certification of the Senate election with the stipulation that he takes his case to the state court by Monday.

The target date for certifying the election is Nov. 29. A recount can then be requested by Dec. 4.

State law stipulates that write-in ballots must have the provided oval filled in and the candidate's last name or name written as it appears on their declaration of candidacy.

"Defendants nevertheless have decided to ignore the statute and create 'exceptions' to count ballots that do not satisfy these clear requirements," the 21-page lawsuit filed in Fairbanks states. "By so doing the defendants have violated the mandatory legislative requirements and fundamentally altered the election."

The state, however, cites case law in counting Murkowski ballots containing misspellings or those phonetic to her name. Lt. Gov. Craig Campbell, who oversees elections, defends the procedure and says the state doesn't want to disenfranchise any voters.

Campbell, who was out of state Monday and could not be reached for comment, is named in the lawsuit along with the state Division of Elections. Division director Gail Fenumiai did not immediately return requests for comment.

Miller, who has said the law should be strictly followed, also alleged among other things that the U.S. Constitution's Elections Clause and equal protection were violated.

The complaint maintained that write-in candidates like Murkowski have a substantial advantage because of the state's practice of hand-reviewing write-in ballots to determine voter intent. Ballots for other candidates went through automatic machines.

The Miller campaign has said he wants a hand count after a court rules on the standard by which ballots should be judged.

Meanwhile, Miller's campaign has been going through voter rolls to try to match the number of people signed up to vote with votes cast in certain precincts to ensure there was no voter fraud or other irregularities. The campaign has provided affidavits, generally from supporters, that have cited irregularities like an unsecured ballot box, ballots sorted by candidate and signatures that appear similar — the last of which could be due to voters receiving requested, allowable aid in filling out ballots.

The lawsuit says the state has ignored state law requirements implemented to prevent voting fraud and uphold the integrity of the process, "thereby casting serious doubt on the returns from certain precincts."

The Alaska Republican Party has urged Miller to concede.

Even if every challenge is upheld, Miller has lost the election, Murkowski's campaign manager Kevin Sweeney said, adding they would intervene in the lawsuit.

"In order to ensure that the intent of voters is fully honored and that every Alaskan's vote is protected, the Murkowski campaign will be intervening in Mr. Miller's baseless litigation," Sweeney says in a statement.