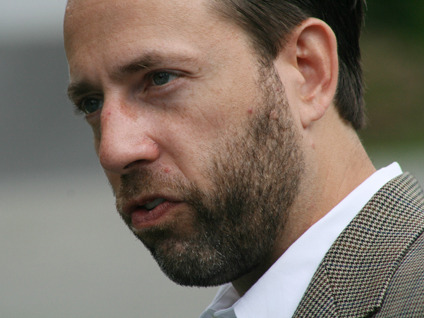 In ongoing efforts to stay in a race that many consider over, Alaska Senate candidate Joe Miller is likely to file a state lawsuit on Monday to prevent Lisa Murkowski from being certified as the winner of the three-way Alaska Senate contest, in which Murkowksi ran as a write-in candidate. Monday is Miller's deadline for filing the suit.

A federal judge ruled on Friday for a temporary injunction to halt election officials from certifying Murkowski as the winner of the race, despite the fact that the state's estimates currently have her ahead by more than 10,000 votes. But the judge  stipulated that Miller must take his case to a court by Monday if he wanted to proceed.

The Alaska Republican Party has already called on Miller to concede the race, but the Sarah Palin-backed Tea Party Republican continues to object to the ballot-counting process in this unusual election, arguing that Murkowski - who, if she wins, will be the first write-in candidate to win a major race since 1954 - had an unfair advantage.

"As the Division counted the write-in ballots, it became clear that it was implementing a discriminatory policy that gave a substantial advantage to write-in candidates," Miller's attorney Thomas Van Flein wrote in his latest filing, according to the Alaska Dispatch.

Van Flein, who also serves as Palin's attorney, continued that the process of "counting write-in votes that had been rejected by automated tally machines if the voter's intent was clear -- but not doing the same for other votes -- gave a substantial, unfair, and illegal advantage to write-in candidates such as Lisa Murkowski."

Murkowski declared victory last week, and her campaign has downplayed Miller's recent efforts to prevent a formal declaration in her favor, arguing any challenge he might mount is likely to be futile - and potentially embarrassing. "Lisa Murkowski is still beating him by a significant vote total even without the challenged votes," Kevin Sweeney, Murkowski's campaign manager, told the Alaska Dispatch in a recent interview.

"It doesn't make sense to me that he [Miller] continues to delay the inevitable. He's going to court in order to hope to lose by less votes," Sweeney said. "We're going to court in hopes that he'll lose by more."

Meanwhile, South Carolina Senator Jim DeMint, who raised $5.6 million for conservative candidates this year, continues to urge activists to support Miller in his bid against Murkowski: In a letter posted on the website for his Senate Conservatives Fund, DeMint writes that "Joe Miller can win this race, but he's up against a well-financed legal team that is working for Lisa Murkowski. They will be fighting to bend the law in Alaska, which requires write-in ballots to accurately state the candidate's name."

"Joe Miller needs the help of freedom-loving Americans who recognize the importance of winning this race," the post continues, ending with a final plea for contributions to the Joe Miller Recount Fund.

It is unclear whether or not Miller seeks a recount in which all the votes, including votes for him, are specifically tallied by hand. But Alaska Elections Director Gail Fenumiai, who according to state law has the authority to determine a recount method, told the Juneau Empire that she would not opt for such an alternative.

"We do all of our recounts by machine," Fenumiai said.