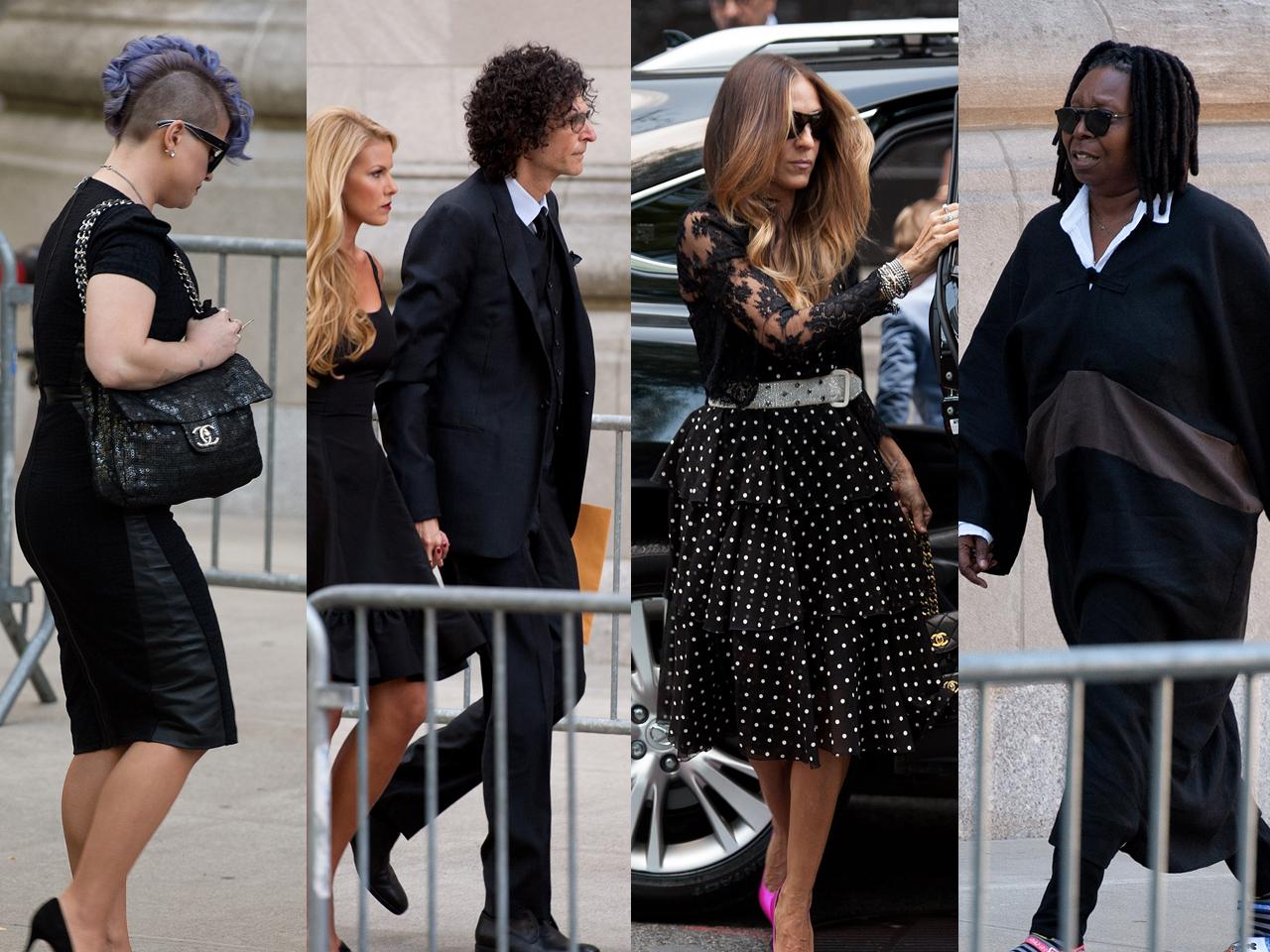 At a funeral befitting a superstar, the New York City Gay Men's Chorus sang Broadway hits including "Hey Big Spender" before six-time Tony Award-winner McDonald sang her tribute to Rivers, a champion of theater for decades.


Tributes and reminiscences were delivered by TV anchor Deborah Norville, close friend Margie Stern, columnist Cindy Adams and Rivers' daughter, Melissa, who spoke about how she respected her mother and appreciated everyone's support.

"It was uplifting. We were celebrating her life," said fashion designer Dennis Basso.

Hugh Jackman sang "Quiet Please, There's A Lady On Stage" at the end of the ceremony and bagpipers from the New York City Police Department played on the streets as mourners filed out of Temple Emanu-El, many dabbing their eyes.

"She would love this. We've all said this so many times: The one person who would really think this is the greatest thing ever is the lady who it's all about, and she's not here," said Norville afterward, amid the throngs of well-wishers and sound of bagpipes.


The funeral program included a page with three classic Rivers' lines printed out: "Can we talk?" ''Who are you wearing?" and "Because I'm a funny person."

Mourners had lined up outside the Fifth Avenue synagogue and waited for their names to be checked against a list before entering. A crowd of media stood watch across the street, and fans from as far away as Australia and England lined the streets.

Actress Susan Claassen, who met Rivers in London in 2008 when both had one-woman shows, came from Tucson, Arizona, to honor her friend. "I always like to say that in a world of knockoffs, Joan was an original," she said.

The comedian detailed in her 2012 book "I Hate Everyone ... Starting With Me" that she hoped for "a huge showbiz affair with lights, cameras, action" and "Hollywood all the way." Instead of a rabbi talking, Rivers asked for "Meryl Streep crying, in five different accents" and "a wind machine so that even in the casket my hair is blowing just like Beyonce's." Indeed, her wishes were so important they were printed in the funeral program.

Rivers was a trailblazer for all comics, but especially for women. The raspy-voiced blonde with the brash New York accent was a TV talk show host, stage, film and TV actress, fashion critic, and she sold a line of jewelry.

The cause of death is being investigated. Rivers was hospitalized on Aug. 28 after she went into cardiac arrest during a routine procedure at a doctor's office. The New York state health department is investigating the circumstances, and the New York City medical examiner said tests to determine the cause of death were inconclusive.

Her publicist said that in lieu of flowers, donations can be made to God's Love, We Deliver; Guide Dogs for the Blind; or Our House.