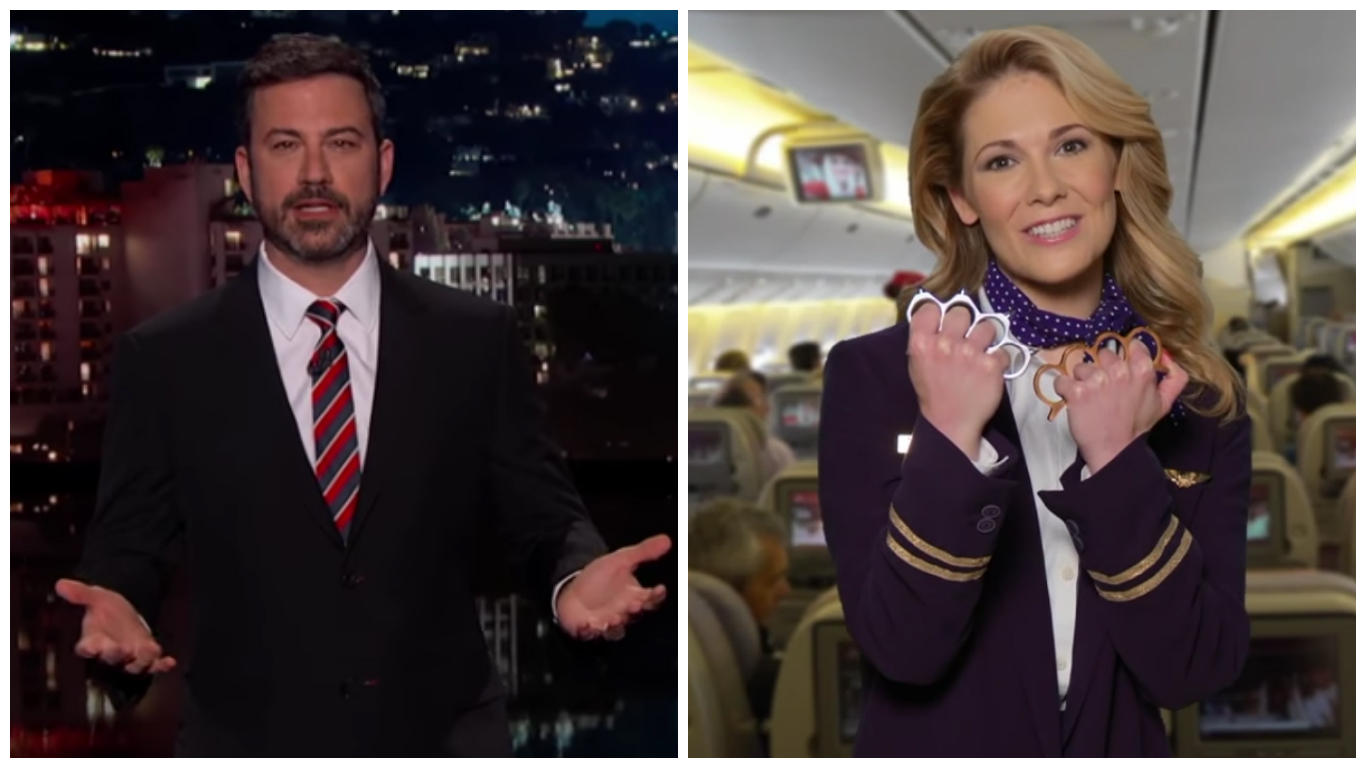 By now, you’ve likely seen the viral video of a passenger being physically dragged off an overbooked United Airlines flight after insisting he was a doctor who needed to get back to his patients and refused to give up his seat.

And of course, late night comedians saw it as well. So, Monday night, Jimmy Kimmel unleashed on the transportation giant with a nearly five-minute tirade on the initial incident and what he perceived as the CEO’s severe mishandling of it afterward.

“That is such sanitized, say-nothing, take-no-responsibility, corporate-B.S. speak,” Kimmel commented on the latter. “I don’t know how the guy who sent that tweet didn’t vomit when he typed it up.”

He also joked about the ironies of the American public’s relationship with airlines.

“Can you imagine this happening in any other industry?” Kimmel asked the audience. “I mean, imagine if this happened at Applebee’s. Imagine if you sit down, you order your three cheese chicken cavatappi or whatever. Twenty minutes later, the waiter comes over and says, ‘Sorry, we have another party coming in. We need this chair. So, either you can leave or we can make you leave.’ You say, ‘I don’t want to leave. I ordered my chicken. I want to eat.’ And he grabs you by the arm and throws you out. You’d never go to Applebee’s again, right? But that’s the thing. We don’t do that with airlines. The next time we book a flight, it doesn’t matter if it’s United or Delta or American, if one of those flights is a dollar less than the other one, that’s the one we’ll pick.”

It was all amusing. Undoubtedly, though, the highlight of Monday night’s “Jimmy Kimmel Live!” skit -- or rather, roast -- on United was the mock airline safety video they aired at the end of the segment.

“We’re United Airlines,” the video begins. “You do what we say, when we say, and there won’t be a problem. Capiche?”

Then, the cheery b-roll footage of passengers putting their carry-on luggage in the overhead bins and sliding up their windows to see the runway transitions to an equally cheerful flight attendant brandishing brass knuckles.

“Give us a problem and we’ll drag your a-- off the plane,” she says with a smile. “And if you resist, we’ll beat you so badly you’ll be using your own face as a flotation device.”

Finally, the flight attendant’s face appears through a mock airplane window, as the United Airlines logo appears above her head.

“United Airlines,” she says in a singsong voice as the “Jimmy Kimmel Live!” audience splits its sides, “F--k you.”