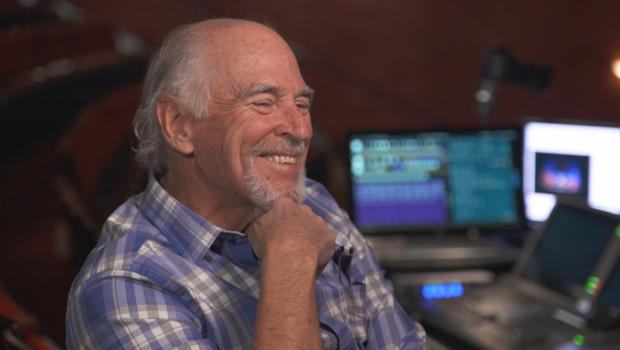 The songs of Jimmy Buffett speak to anyone who's ever dreamed of getting away from it all. Yet now, in a seeming paradox, his songs are being performed in the heart of it all ... ON BROADWAY ... under the watchful eyes of Tracy Smith:

You might say the newest musical on Broadway feels like an old friend. This is Jimmy Buffett's "Escape to Margaritaville."

You won't see Jimmy on stage, but every song is his. Feel free to sing along!

Smith said, "Broadway is a big gamble. You don't have to do this; you're rather comfortable, I would say. Why stick your neck out?"

"'Cause for me it's the challenge of doing it," Buffett replied. "I've always wanted to do it. You know, one of my favorite songs was always The Drifters -- They say the neon lights are bright on Broadway. I sing it every time I walk down here to work.

"And I think about my mother and when she would drag me to musicals, you know, when I was a kid. It's more about for her. I wish she was here to see this, but she's the one that set me on this path. So, I figure I gotta do it!"

To watch a trailer for "Escape to Margaritaville" click on the video player below.

Well, now he is. His show opened for New York previews Friday night, but the road to Broadway began many months -- and many miles -- ago in sunny San Diego, California.

Smith was there for Day One last March. Tony-winner Christopher Ashley ("Come From Away") was directing; Buffett was on hand to watch his baby come alive.

Paul Alexander Nolan is the lead, playing a lounge singer reminiscent of a young Jimmy Buffett.

To hear Paul Alexander Nolan and Jimmy Buffett perform "Margaritaville" click on the video player below.

This is a jukebox musical: Of the 27 songs in the show, only two are actually new. The rest, like "License to Chill," are proven crowd-pleasers.

"Most of the songs people have heard," Buffett said. "It's not like we're waiting to see if they're good or not. We're kind of OK, right? We don't want to go in there and do what they don't know!"

That idea seemed to pay off: On opening night last May, San Diego's La Jolla Playhouse was completely packed.

And when Buffett jumped on stage for the curtain call, they were quite literally dancing in their seats.

"Looks pretty good to me!" he said.

After a two-month run in San Diego, Buffett took the show to a place he used to call home: The Big Easy. It's where he got bit by the show business bug. "It bit me several times in this city," he told Smith.

In some ways, New Orleans was where Jimmy Buffett became Jimmy Buffett. Raised in Alabama, he tried to break into the music business in Nashville, and drifted to New Orleans in the early '70s, playing for tourists in the clubs and the streets as one of the city's sidewalk musicians.

The experience, he says, taught him everything.

Smith asked, "Do you think there would be a Jimmy Buffett if there wasn't a New Orleans?"

"That's a very interesting question. I don't think there ever would have been. I could have gotten a job going South, probably would have had a bar in the British Virgin Islands and singing there," he replied. "But those years being here really were formative years for me. And it made me a better professional player, so that I thought I could make that leap and all of that. This was my training ground for all of that."

In the years that followed, he moved to Key West, Florida, refined that country-meets-Caribbean sound, and his career took off. But somewhere along the way Buffett realized that he might be having a little too much fun.

Smith said, "At some point in your 30s, late 30s, you said you were blessed with a lick of common sense and you stopped partying as much. Why?"

"Well, hangovers became, like, surgical recovery," he said. "And I didn't want to be one of those statistics. And I owed it to my parents, who had worked hard, you know, to give all of us kids what they could. I thought I owed it to them to not be that.

"And by that time I knew that I also was in charge of the band. I didn't want be in one; I wanted to run one. And I knew that. And I guess it kind of goes back to being raised in a seafaring family where there was ship captains and people in charge. Somehow I figured I'd rather be that than in the crew. I wanted to be the captain."

By the early 1990s Buffett was one of the biggest acts in the business, with hordes of adoring fans who called themselves "Parrotheads," as "Sunday Morning"'s own Bill Geist reported back in 1992.

Now, at 71 he's still touring with his Coral Reefer Band, in-between running his restaurants and hotels, and, of course, rehearsing his new Broadway musical.

Smith said, "You know how there's that analogy of the duck that's cruising along and looks like he's just cruising along, but if you look under the water, those legs are working. Is that you?"

"You're the guru of the laid-back lifestyle. But are you really laid-back?"

"I think I am! I look pretty happy to myself!"

"Well, everybody thinks that, yeah, I'm either laid back in a hammock or I'm working my ass off. I'm somewhere in the middle, in my humble opinion, because, you know, if you look at our tour schedule now, we work on the road, when we do our show, we work Saturday, Tuesday, Thursday, Saturday. We always take a day off, 'cause we are an old band. We try to stay in shape, but ... we weren't supposed to last this long!"

For Buffett, a married father of three, it's been a long voyage, and not always an easy one.

When asked what was the biggest storm he's weathered, he replied, "Wow. There was a point -- I think it's a year or two-year period -- where I lost my mom, my dad, Ed Bradley, one of my best friends. But I have to think that, what would they want me to do? And all I can think of is continue doing what I'm doing."

His fans seem to want that, too.

When "Escape to Margaritaville" played in New Orleans, the reception was just as warm as it had been in San Diego.

We even bumped into a few fans on the street. "Saw your show yesterday!" said one man.

"We loved it!" a woman replied.

Buffett turned to Smith: "That was a good review, right?"

And now, after stops in Houston and Chicago, Jimmy Buffett is betting that New York audiences will feel the same way.

Smithy asked, "Are you feeling a little bit nervous?"

He reasoned, "There's nothin' I can do about it now!"

"You never know what the public's gonna buy, but I'd jump outta the door on this airplane and see what happens. Yeah! Leap and the net will appear. Hopefully! So, I'm ready to leap."