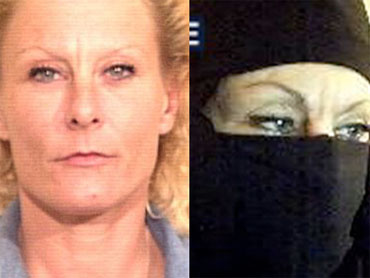 Whether she was seeking love or vengeance, or just an escape from her dreary, small-town existence, Colleen LaRose searched the Internet and found Muslim extremists eager to engage the unhappy American.

LaRose, 46, spent long days chained to her Pennsburg, Pa., apartment caring for an elderly parent. Now, "Jihad Jane" may now spend her life in prison - unless she persuades a U.S. judge she is not a security threat.

On Thursday, LaRose makes her first court appearance since a stunning indictment last week that charged that she plotted with terror suspects abroad to kill a Swedish artist who had offended Muslims.

LaRose's appearance may offer clues to her mental state after six months in a Philadelphia prison.

The Council on American-Islamic Relations has questioned the religious devotion of alleged converts like LaRose, given her live-in boyfriend and apparent failure to ever pledge her faith at a mosque.

"Maybe it's not the Islamic faith that is making them do this; maybe it's just their personal demons," said Ibrahim Hooper, national communications director for CAIR.

LaRose spent most of her life in Texas, where she dropped out of high school, married at 16 and again at 24, and racked up a few minor arrests. After a second divorce, she followed a boyfriend to Pennsylvania in about 2004 and began caring for his father while he worked long hours, sometimes on the road. In 2005, she swallowed a handful of pills in a failed suicide attempt, telling police she was upset over the death of her father - but did not want to die.

As she moved through her 40s without a job or any outside hobbies, her boyfriend said, she started spending more time online.

Though her boyfriend, Kurt Gorman, did not consider her religious, and she apparently never joined a mosque, LaRose had by 2008 declared herself "desperate" to help suffering Muslims in a video she posted on YouTube.

"In my view, she sort of slipped sideways into Islam. ... There may have been some seduction into it, by one or more people," said Temple University psychologist Frank Farley.

LaRose and Gorman shared an apartment with his father in Pennsburg, a quaint if isolated town an hour northwest of Philadelphia. Just days after the father died last August, she stole Gorman's passport and fled to Europe without telling him, making good on her online pledge to try to kill in the name of Allah, according to the indictment. From June 2008 through her Aug. 23, 2009, departure, the woman who also called herself "Fatima Rose" went online to recruit male fighters for the cause, recruit women with western passports to marry them, and raise money for the holy war, the indictment charged.

She had also agreed to marry one of her overseas contacts, a man from South Asia who said he could deal bombs and explosives, according to e-mails recovered by authorities.

He also told her in a March 2009 e-mail to go to Sweden to find the artist, Lars Vilks.

"I will make this my goal till i achieve it or die trying," she wrote back, adding that her blonde American looks would help her blend in.

Of the seven people arrested by police in Ireland for links to the alleged plot against Vilks, only two are still in custody and facing charges in that country.

Another American woman, Jamie Paulin-Ramirez of Colorado, was released by Irish authorities over the weekend. Her whereabouts remain unclear.

Vilks questioned the sophistication of the plotters, seven of whom were rounded up in Ireland last week, just before LaRose's indictment was unsealed. Still, he said he was glad LaRose never got to him. Although she had written the Swedish embassy in March 2009 to ask how to obtain residency, and joined his online artists group in September, there is no evidence from court documents that she ever made it to Sweden. Instead, she was arrested returning to Philadelphia on Oct. 15.

Some terrorism experts wonder if LaRose posed any serious threat to Vilks or the United States - or was simply a lost soul.

"People in distress blame the government, and now blaming the government means taking the side of these Muslim terrorists," said Ian Lustick, a University of Pennsylvania political science professor. "They're about as jihadist as you and me, but they're a lot less happy."