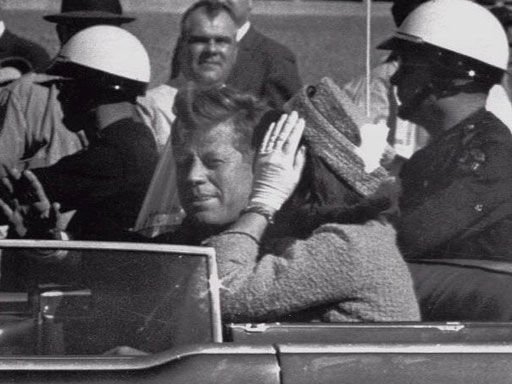 Walter Cronkite delivered the first, shocking news of the shooting, his voice heard over a black screen in a CBS News Bulletin: "In Dallas, Texas, three shots were fired at President Kennedy's motorcade in downtown Dallas."

Less than a minute later he gave this grim prediction: "United Press says that the wounds for President Kennedy perhaps could be fatal."

It was the start of four days of now-historic broadcasting branded in the country's collective memory, from the announcement by Cronkite of John F. Kennedy's death, President Lyndon B. Johnson asking for the country's help; the fatally-wounded Lee Harvey Oswald being loaded into an ambulance; and at the end, the horse-drawn caisson carrying Kennedy's flag-draped casket.

"These four days began in consternation and grief as the president was struck down and the nation struggled to comprehend the tragedy," CBS News' Charles Collingwood said at the conclusion of the special coverage. "They ended tonight with the focus on the new president, surrounded at a great reception by the leaders of other nations and their emissaries. That is the way nations survive. The president may die. The presidency must not."

CBS News' initial bulletin abruptly interrupted the soap opera "As the World Turns" with the reports that Kennedy had been seriously wounded. Jacqueline Kennedy grabbed her husband and cried out, "Oh no," and the motorcade sped on, Cronkite said.

The president was raced to Parkland Memorial Hospital, but about half an hour after he had been shot, John F. Kennedy was dead, Cronkite told the country.

"From Dallas, Texas, the flash apparently official, President Kennedy died at 1 p.m. Central Standard Time, 2 o'clock Eastern Standard Time, some 38 minutes ago," he said, removing and then replacing his glasses, as he struggled to stay composed.

In downtown Chicago, CBS News' Russ Bensley spoke with people about the assassination. The Christmas decorations brought no joy, he said. The crowds who had come downtown to shop were instead standing about in the rain in silence and shock.

Four and a half hours after the assassination, Air Force One returned to Washington, D.C., carrying Kennedy's coffin, Jacqueline Kennedy and Johnson, sworn in as the 36th president aboard the presidential plane just before it took off from Love Field.

The network had the images live – as shouts in the newsroom make clear when CBS News' Harry Reasoner mistakenly identifies the footage as film or tape.  Kennedy's coffin is seen being carried off the airplane into an ambulance and behind it, Jacqueline Kennedy is helped from the plane.

Johnson meanwhile stepped to the microphones, Lady Bird Johnson at his side, to address the country for the first time as president.

Rather describes first Kennedy, then Texas Gov. John Connally being struck by bullets.

"As Gov. Connally fell back, President Kennedy was still leaned over at that moment, another bullet obviously hit the head of the president," Rather recounts.

Frame 313 of the 8-millimeter film -- so explicit that when Life magazine published still shots of the film it omitted the frame in deference to the grieving Kennedy family -- shows Kennedy's head exploding in blood.

Before Kennedy was elected president, the then-junior senator from Massachusetts had once talked about the ease with which an assassin could kill a president and said he thought the Secret Service had an impossible responsibility. CBS News' Charles Von Fremd recalled the interview.

"John Kennedy argued that any intelligent sharp-shooter, however mad, could gun down the president of the United States if he wanted to badly enough, and planned it carefully enough," Von Fremd said. "He thought the Secret Service agents running alongside the presidential limousine in a motorcade only succeeded really in just blocking the view of the average public who turned out to see him."