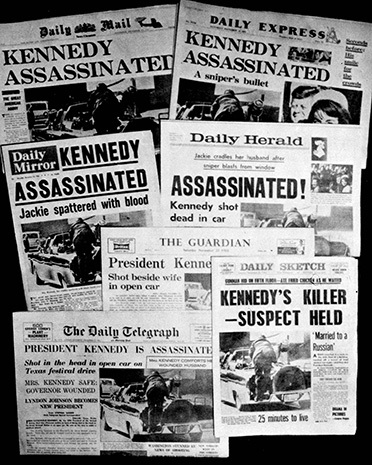 From Dallas to Paris, from statesmen to ordinary people, the world mourned the assassinated president.

The day after John F. Kennedy was killed, CBS News’ Dan Rather stood at what he called the now infamous corner of Houston and Elm streets in downtown Dallas, where the shooting had occurred. With the camera closing in on the Texas School Book Depository and the corner window from which the shots had been fired, Rather noted the exceptionally heavy traffic as thousands of people drove by to see the spot for themselves.

“The assassin apparently propped his .30-caliber weapon up on some boxes and some school textbooks to get a good line of sight on President Kennedy as his car passed this intersection,” Rather reported.

A mourning wreath had been placed across the street, a line of people stretched the length of the block, and the county jail was catty corner from where the shooting occurred. It was there that 24-year-old Lee Harvey Oswald was to be brought at any moment, Rather said.

“Police indicate that they may finish questioning Oswald, at least their initial interrogations, sometime late this afternoon or early this evening,” Rather said.

Oswald of course never left the city police headquarters. He was instead shot by Jack Ruby in the basement of the building as he was being transferred.

In Massachusetts, Kennedy's parents grieved. Sen. Edward Kennedy broke the news to their father, Joseph, who had had a stroke. Their mother, Rose, attended Mass at St. Francis Xavier Church in Hyannis.

Meanwhile, expressions of sorrow came in from all segments of the country, CBS News’ Walter Cronkite said. Among the prominent Americans to talk to reporters were the civil rights leader Martin Luther King Jr., former presidents and other office holders.

King said that he learned of the shooting from a member of his congregation with whom he was on the telephone, but when he turned on the television it was not known whether Kennedy was alive or dead.

“It was one of the most shocking things I’d ever heard,” he said. “Frankly I was very upset and couldn’t adjust to it and could hardly believe it in the beginning.”

King recalled a dinner at the White House when he visited the Lincoln Room and suggested to Kennedy that he sign a second Emancipation Proclamation there. The civil rights leader went on to praise Kennedy’s civil rights bill.

“It’s too bad that those things have to happen, particularly by some good-for-nothing fellow who didn’t have anything else to do but to try to take the head of the state away from us,” Truman told reporters gathered around him.

“In the face of such a terrible thing, I’m sure the entire citizenry of the nation will join as one man in expressing not only their grief but their indignation at this act, and we’ll stand faithfully behind the government,” he said.

Former Vice President Richard Nixon, defeated by Kennedy for the presidency, said Kennedy had written the final and greatest chapter in his book, “Profiles in Courage.”

“Today millions of people throughout the world are trying to find words adequate to express their grief and their sympathy to his family,” he said.

Pope Paul VI read a message of sympathy. As CBS News’ Harry Reasoner noted: “John Kennedy was the first Catholic president of the United States, and as his election brought a special sense of joy to Catholics, his death brought a special sadness.”

“Tonight I fear there is no comfort that I can bring to the American people, nor indeed to ourselves, nor indeed to men anywhere who care for tolerance and liberty and justice and peace, unless it be this: That this dreadful deed should shock us all to dedicate ourselves anew to those things which he liked, which he loved and for which he worked during his life,” Douglas-Home said.

In Paris, there was an atmosphere of disbelief, CBS News reported. In West Berlin, Brandt said the city was in mourning.

“Berliners know that they have lost their best and strongest friend,” Brandt said.

From the leaders to the world’s people, many across the Western world had reason to feel a special closeness toward the president, Reasoner reported. Italians flocked to sign their condolences, Germans held a torchlight parade. In London, where Queen Elizabeth said she was horrified, the tenor bell tolled at Westminster Abbey.

Finally, in Dublin, the loss was personal, as if a neighbor’s son had died.