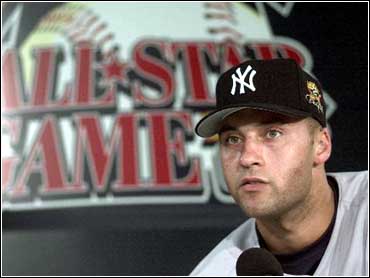 Derek Jeter is going for a baseball salary record, just like his friend, Alex Rodriguez.

Last year, Jeter set an arbitration record when he asked for $10.5 million. The Yankees countered at $9.5 million and the sides settled at the midpoint.

Jeter's big raise is due to Rodriguez, who last month agreed to a record $252 million, 10-year contract with the Texas Rangers. That markedly raised Jeter's price.

If Jeter winds up with a one-year deal, win or lose, it would be the top one-year package in baseball history, surpassing David Cone's $12 million contract with the Yankees last year.

The other New York player left in arbitration, closer Mariano Rivera, asked for $10.25 million, which would be a record one-year salary for a relief pitcher. The Yankees offered him $9 million.

Last year, Rivera and the Yankees wound up before an arbitrator, who chose the team's $7.25 million over the pitcher's $9.25 million request.

Jeter and the Yankees both hope to avoid a hearing and a one-year contract. New York president Randy Levine and Casey Close both hoped to negotiate a multiyear contract, but it still was unclear whether Yankees owner George Steinbrenner was willing to give his approval to what would be the largest contract in team history.

Jeter, 26, is eligible to become a free agent after this season and his price for a longterm contract would be even higher next fall.

Last year, Jeter led the Yankees with a .339 batting average and was selected MVP of both the All-Star game and the World Series. He had 15 homers, 73 RBIs and 22 stolen bases during the regular season.

Close and Levine agreed a year ago to a $118.5 million, seven-year contract, but Steinbrenner wouldn't finalize the deal because the average salary of $16,928,571 would have been a record.