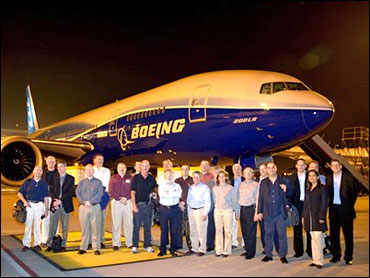 A Boeing Co. jet arrived in London from Hong Kong on Thursday, breaking the record for the longest nonstop flight by a commercial jet.

A representative of Guinness World Records, which monitored the flight, presented Boeing's Lars Andersen with a certificate confirming it was for the longest nonstop commercial flight.

Captain Suzanna Darcy-Hennemann, was at the controls when the plane left Hong Kong, said the trip east across the Pacific had been bumpy.

"But we had a great ride across the United States ... and across the Atlantic we saw our second sunrise of the trip," she said.

"With the 777-200LR, we are changing the world," he said. "Passengers can fly commercially between just about any two cities nonstop."

The plane had four pilots and was carrying 35 passengers and crew, including Boeing representatives, journalists and customers.

The record-breaking attempt is part of Chicago-based Boeing's fierce competition with its European rival Airbus SAS. The Boeing 777-200LR Worldliner was designed to compete directly with the popular Airbus 340-500, which has a flight range of 10,380 miles.