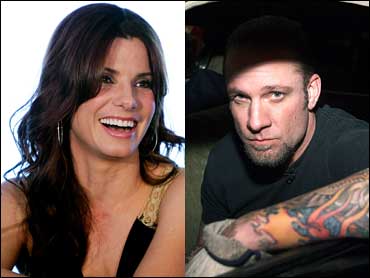 Actress Sandra Bullock married mechanic and reality TV star Jesse James at a ranch near Santa Barbara, according to reports.

Many in Hollywood have been surprised at the pairing of the tattooed bad boy James and the on-screen good girl Bullock. They met in 2003.

It's the first marriage for "Miss Congeniality" star Bullock, who had been engaged to actor Tate Donovan. She recently played the wife of a district attorney in the film "Crash."

Bullock last month was listed as 65th on this year's Forbes Celebrity 100 list of famous people who make the most money and attract the most attention. In March, she received a star on the Hollywood Walk of Fame. Shatner was also among the guests at that event.

James, who was previously married twice and has three children, appears on The Discovery Channel's "Monster Garage."

He is a descendant of famed western bank robber Jesse James. When asked early this year about his relationship with Bullock, James told CBS News 60 Minutes Correspondent Vicki Mabrey "I'm not talking about her."

"You're getting nervous now, aren't you," retorted Mabrey, laughing. "Are you happy?"